It took $ 600 million and 3 years to build this – not bad for a plant that doesn’t need fuel, leaves no polluting exhaust and is extremely safe. Arabia could be exporting electricity instead of oil. Future business for desert countries?

Who needs oil? World’s largest solar power plant with 258,000 mirrors opens in Abu Dhabi ~ Why Don’t You Try This?

You might think that as one of the world’s top oil producing nations, the United Arab Emirates would have little use for solar energy. But that hasn’t stopped the Middle East state from unveiling the largest concentrated solar power plant in operation anywhere in the world. 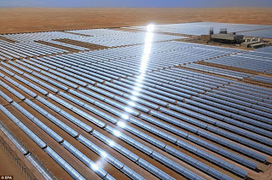 The 100-megawatt solar-thermal project in Abu Dhabi will power thousands of homes in the country and, it is hoped, displace approximately 175,000 tons of CO2 per year.

Phi Beta Iota:  For the three trillion we spent on war recently (not including the hundreds of billions in damages we caused to this and future generations) we could have installed solar power stations and seawater distillation stations everywhere, with an even balance between centralized and distributed (micro-networks) while also giving every person on the planet a free cell phone for life, free access to the Internet for life, and a free education.