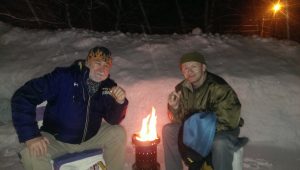 I came to Norway to stir the pot on several critical topics, including what role the Norwegian government might play in helping Donald Trump and Vladimir Putin agree to wage peace when they meet privately in Hamburg in July 2017; and what role a revitalized Nobel Peace Prize Committee might play in encouraging peace instead of rewarding war-mongers and political publicity artists. My trip was undertaken at the suggestion of Editor-in-Chief Jan H. Kalvik, whose recommendation of me for the Nobel Peace Prize has been a useful provocation.[1]

I spent ten days in Norway. I left with two impressions.

POSITIVE: Norway is in a position to encourage President Donald Trump and President Vladimir Putin to “declare peace” when they meet in Hamburg in July 2017. President Putin has offered President Trump a “Reykjavik moment” prior to the G-20 meeting.  I believe that the government of Norway (the Minister of Foreign Affairs particularly) has an opportunity to approach US Secretary of State Rex Tillerson with a proposal for an Open Source Agency (OSA) initiative that could be replicated on other continents so as to achieve the United Nations Sustainable Development goals within ten years at ten percent of the cost of the failed Western industrial paradigm, using instead the new Open Source Everything Engineering (OSEE) paradigm. This would be paid for by the US – the Office of Management and Budget (OMB) senior staff has twice pre-approved an allocation beginning at $125 million in year one growing to $2 billion in year six. A portion of that money could be spent in Norway, creating OSEE innovation centres. With respect to the Nobel Peace Prize process, I note the recent death of the past Chairman and the prospect for change under a new chairman. Now is the time to reconcile the Nobel Peace Prize process with the will of Alfred Nobel.

NEGATIVE: The leading universities of Norway, whose rectors I approached directly before visiting, and the Research School on Peace & Conflict (PRIO) that pretends to “own” public commentary on the Nobel Peace Prize – and other elements of Norwegian society – have lost the ability to think critically. Their heads seem to be buried in the sand and their sole focus appears to be on ensuring that nothing threatens their welfare funding from a government that is about to go bankrupt. The one exception is the Norwegian-American Chamber of Commerce.

The Deep State in Norway reared its ugly head before I landed — NRK’s highly-respected Anne Dorte Lunås emailed me asking or an interview in the aftermath of my press release in Norwegian,[2] only to abruptly cancel the interview a day later — her editor appears to have discovered I was critical of corrupt politicians, NATO, and the Nobel Peace Prize; evidently such negative views are not authorized news.

Highlights of my ten-day visit included:

My visit also included private meetings with a Norwegian citizen championing hemp production as an alternative source of revenue for the state; a Swedish businessman who drove up via the ferry to have dinner and discuss sustainable business profit models; and several others in Norway who prefer to remain anonymous.

Subsequent to my visit I deepened my dialog with the Director-General of the Russian International Affairs Council (RIAC), Andrey Kortunov, who is taking the lead in working with the counterpart organization in India, Vivekananda International Foundation (VIF), to establish talking points for the forthcoming meeting between Russian President Vladimir Putin and India Prime Minister Narendra Modi. The ideas that led to my being recommended for the Nobel Peace Prize are now in play with two great nations who have the power – regardless of what China and the USA do – to lift up the poor, wage peace, and achieve prosperity for all. This new work joins my Nordic Manifesto (see Note 1) as an actionable program for any government genuinely interested in peace instead of war, prosperity instead of poverty.[16]

I have also challenged the lies by rogue elements of the US Government, notably American traitors John McCain, John Brennan, and Herbert McMaster, with respect to the known false flag attack funded by Israel and Saudi Arabia with the intent of luring the USA into inserting 150,000 US ground troops into Syria.[17]

Et tu, Norway? The truth at any cost lowers all other costs. We the People desire integrity in all matters.

[1] Jan H. Kalvik, “Intelligence & the Nobel Peace Prize,”Defence and Intelligence Norway. 6 February 2017. The documents that inspired him to recommend me, and the long-form nomination that he gave to a Minister with the suggestion that I be nominated, are below:

[11] The jury is still out on the matter of Thule Drilling. On balance, I tend to believe Hans Eirik Olav and recommend his testimonial on the Norwegian Deep State, Thule Drilling, and the willful violation of US sanctions on Iran, as offered at “Thule Drilling – The unplugged story,” (YouTube, 2:03:04), 22 March 2017. Additional documents in his defense are posted at “Hans Eirik Olav: Testimonial on Norwegian Deep State, Thule Drilling, & Violation of US Sanctions on Iran,” Phi Beta Iota Public Intelligence Blog, 26 March 2017. Recently he has published at Amazon, in both Kindle and CreateSpace paperback, The Grand-Self-deception: A Libertarian Manifesto Against the Deep State – The Failed Welfare-Taxation Model of Norway, Amazon, 26 April 2017. The best two books in English on the high crimes of the Deep State and the manner in which grand theft is legalized for state-sponsored enterprises are Matt Taibbi, Griftopia: A Story of Bankers, Politicians, and the Most Audacious Power Grab in American History (Spiegel & Grau, 2011); and Matt Taibbi, The Divide: American Injustice in the Age of the Wealth Gap (Spiegel & Grau, 2014).

[16] Steele, Robert. “Concept for a Post-Western Economic-Engineering Paradigm: How Putin-Modi and Xi-Trump Can Save Humanity with Open Source Everything Engineering (OSEE),” Russian International Affairs Council, 5 April 2017.