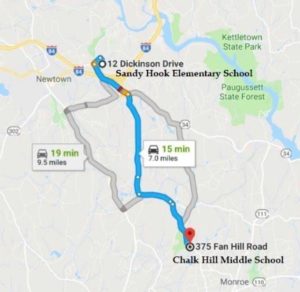 There are many signs pointing to Sandy Hook Elementary School (SHES) having been closed long before the alleged mass shooting on December 14, 2012, including:

Recently, Wolfgang Halbig acquired five pieces of additional evidence that SHES at 12 Dickinson Drive was abandoned by mid-2012, if not earlier, and had moved to an empty school, Chalk Hill Middle School at375 Fan Hill Rd. in neighboring Monroe, CT: 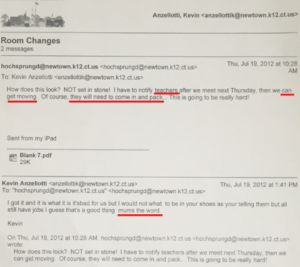 Here are the words as extracted from the screen shot:

Hochsprung: “How does this look? NOT set in stone! I have to notify teachers after we meet next Thursday then we can get moving. Of course, they will need to come in and pack….This is going to be really hard!”

Anzellotti:  “I got it and it is what it is it’s bad for us but I could not what [sic] to be in your shoes as your [sic] telling them but all still have jobs I guess that’s a good thing mums the word.” Emphasis added.

Dean Foods is a national food and beverage company and the largest dairy company in the United States. Headquartered in Dallas, Texas, the company has 66 manufacturing facilities and distributes its products across all 50 states. On April 26, 2012, 8 months before the alleged massacre, Dean Foods prepared an invoice of an order from Sandy Hook Elementary School for “American/Continental” style cuisine. Strangely, the food was to be sent not to 12 Dickinson Drive, Sandy Hook, CT 06482, but to the address of Chalk Hill Middle School at 375 Fan Hill Rd., Monroe, CT. Here’s a screenshot of the invoice: 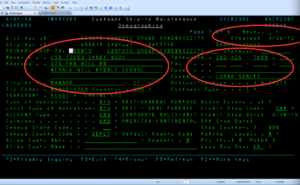 Here is a screenshot of a Spreadsheet listing 15 invoices from 1 September 2012 to 15 December 2012, for food deliveries to SHES at 375 Fan Hill Road in Monroe, which confirms the change in location: 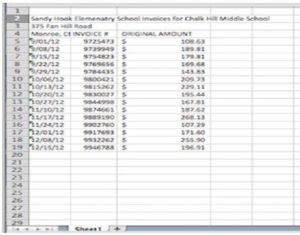 Halbig received the invoice and spreadsheet from X, an employee of Dean Foods. I have verified the identity of X on LinkedIn, but I’m not revealing X’s name to protect his/her life. Halbig fully intends to introduce X’s emails, the invoice and spreadsheet as evidence should a malicious lawsuit against him go to trial. Below is the email from X confirming that the food orders for SHES were being delivered to the Chalk Hill Middle School address in Monroe, CT. I’ve blacked out the sender’s name: 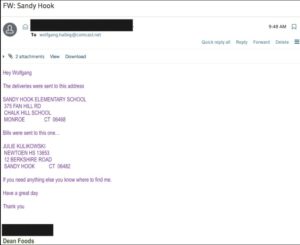 Though officially empty since June 2011, Chalk Hill Middle School curiously applied for broadband and Internet connectivity services from Universal Service Administrative Company (USAC), as indicated in an USAC Application Form 471 on 13 March 2012. All U.S. public schools and libraries are required by the FCC to use USAC Form 471. Obviously, if Chalk Hill were not in use, there would have been no point: 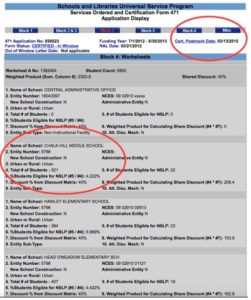 Nothing about Sandy Hook turns out to be as it was presented to the public. The Dickinson Drive school was closed by 2008 and there were no students there. Evidence indicates that the school was operating administratively at the Chalk Hill location by mid-2012, if not earlier. The old building was refurbished to serve as the stage for a two-day FEMA drill, for which we even have the manual. Anticipating they would have to be able to account for moving their classes to another location following the fake massacre, they set up Chalk Hill for that role, never in their dreams imagining anyone would take the time and effort to sort all of this out, where Wolfgang’s discoveries reinforce the scope and detail of an extensive and elaborate fraud.

Dr. Eowyn, “Wolfgang Halbig has stunning evidence that Sandy Hook Elementary School was closed months before ‘massacre’” (18 June 2018) My blog was abruptly removed on 15 August 2018, no doubt because of posts like this one. 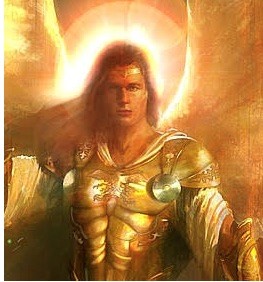 Dr. Eowyn, Ph.D., professor emeritus of political science at a U.S. university and author of university press books and countless peer-reviewed articles, is the owner of the blog, Fellowship of the Minds (FOTM), where more than 80 articles of original research on Sandy Hook had already been archived before the publication of Nobody Died at Sandy Hook (2015).. In the early morning hours of August 15, 2018, WordPress arbitrarily and without forewarning took down FOTM, blocking Dr. Eowyn and her readers from accessing the blog. Five days after the site was taken down, WordPress gave the reason as the vague and all-purpose “we no longer feel that your account aligns with our Terms of Service and User Guidelines. As such, you will no longer be permitted to use WordPress.com.”

Phi Beta Iota: Subsequent investigation determined that one persistent fake parent from Sandy Hook was able to get a New York Times article done that initimidated the founder of WordPress.com into closing down any site showing photos of the fake Sandy Hook victims under the pretense of invading the privacy of minors.  There will come a day when all those complicit in the US Government cover-up of any false flag operation can be sued for damages — but first an honest government must be restored.