VITAL FACT: Republicans control both chambers of the legislatures in each of the states guilty of massive fraud. STATES, not PUBLIC, determine ELECTORS.

TEXT & RELATED Below the Fold

Sidney Powell: They need to investigate the likelihood that 3% of the vote total was changed in the pre-election voting ballots that were collected digitally by using the Hammer program and the software program called Scorecard. That would have amounted to a massive change in the vote. It would have gone across the country and it explains a lot of what we’re seeing. In addition they ran an algorithm to calculate the votes that they might need for Mr. Biden in specific areas. It happened in Michigan where a computer glitch resulted in a change in votes in I believe 5,500 in favor of President Trump just in one of 47 districts. All of those districts need to be checked for the software glitch that would change the vote for Michigan dramatically. The same thing is happening in other states. We’ve had hundreds of thousands of ballots appear for solely Mr. Biden which is statistically impossible as a matter of mathematics. It can all be documented it is being put in files that we will file in federal court.

Escobar: Banana Follies – The Mother Of All Color Revolutions 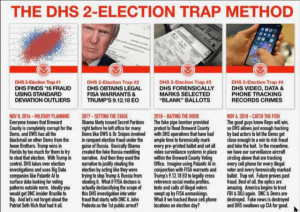 Phi Beta Iota: We believe that there is a very high probability that Team Trump has gamed with all out and is moving toward a decisive outcome that will destroy both the Democratic and Republican parties. President Trump is finishing  what JFK started.