Ben Fulford says that the rest of the world doesn’t want to work with either “side” of the present “US” Government. Multiple diplomatic delegations have told me the same thing. They don’t want to deal with Joe Biden because he is a crook and a creepy old white man who abuses power.

There is no gainsaying why the other countries don’t want to work with him; they don’t, and that’s their stated reason why.

They don’t want to work with Trump, either, because from their point of view, he is an evil old white man who never compromises about anything, ever.

Just telling you, again, what they tell me.

Speaking for the American Experience with these entities, we all have reason to hold both the Municipal United States and the Territorial United States government corporations at arm’s length. And wear rubber gloves.

Once you understand the Big Picture, several glaring facts protrude above the confusion and nastiness on all sides.

Did you know that Nancy Pelosi, acting as a single Plaintiff, has named all “Citizens of the United States of America” as Defendants in a court suit seeking to steal all but $1000 of your checking and savings accounts, and to latch onto your 401K’s?

They don’t call her “Nasty Nancy” for nothing.

We should all hate her guts, and I trust that having read the foregoing, you now have a better appreciation for why.

Fact Two: Bill Gates and Cronies in Britain and within the “Holy Roman Empire” have hatched a new Unlawful Conversion Scheme.

The “vaccination” they are pushing is not a vaccination. It’s an implant procedure to insert a piece of their own patented mRNA into the natural genome of individual living people. This procedure will unlawfully (but legally) convert the victims into Genetically Modified Organisms, GMO’s, that can be claimed as property assets and owned. As slaves and DEBTORS.

It’s a process of branding people like cattle, and claiming them on what these idiots think of as “Open Range”, because they miss the fact that our government never went anywhere and didn’t cease to exist and is now in Session — so in fact, all those “cows” are already wearing the American Brand. And they, the Perpetrators of this Scheme, are Rustlers facing the Death Penalty.

Fact Three: Just as I told you all, the Holy Roman Empire and their pals in Britain operating the Government of Westminster, are parasites that have caused 95% of all the misery and warfare in the world for the past 400 years. And just as I told you, these parasites decided to move to a new host, China. They have been doing everything they could to sell out America and leave nothing but their garbage behind.

Now, from the standpoint of all the rest of us, it’s high time to recognize the source of all these problems, and put an end to them.

If the Catholics and the Brits won’t do their own clean up, it will be left to a consortium of other nations to do their job for them—- but at least we can be assured that the job of mopping up the Roman Empire is finally complete, and we are all agreed that slavery is outlawed in every jurisdiction and under every form of law.

After 3000 years of disagreement on this point, it’s time to settle it.

Fact Four: The Americans are not “the US” in any form, and never were.

It follows that any arguments among his airy-fairy corporations are to be settled promptly by him with no further acrimony or inconvenience or endangerment offered against their innocent erstwhile Employers— the American States and People. And if that is not the immediate result, it’s Pope Francis’s fault.

There is nobody else to blame, unless he cares to blame the Queen and the Lord Mayor for their despicable parts in all of this.

There is this silver lining — we all now know, or have cause to know, who the real Perpetrators are, and it’s not the Americans. It’s not even the Chinese.

Fact Five: The actual American Government has stirred its stumps and there is no longer any reason for anyone to surmise, claim, or presume that the Municipal United States and its Board of Directors is “representing” us, or that the Territorial Government —-as the Pledge of Allegiance says, is “standing for” us — when our States of the Union are in Session.

It’s self-evident that you don’t send a Proxy to a meeting that you are attending yourself, and you don’t need “representation” when you are present yourself.

We are here. Present and accounted for. Provenance intact.

So, here’s the Third Option that everyone is searching for so desperately. Deal with the actual American Government of, for, and by the People of this country: The United States of America.

ROBERT STEELE: I have always had difficulty understanding the details that Anna Von Reitz has worked so hard to promulgate but I have never doubted her intelligence or her integrity. In my world you make decisions based not on a complete grasp of all the details, but based on whether you trust and respect your chosen subject matter expert to have mastered the details and presented a good case for a decision. I make my decisions based on the person, not the details — that is their baliwik. All signs point to Anna Von Reitz and President Donald J. Trump being on the same page. The United Kingdom is the main enemy, not China (China is a tool of the Deep State and General Secretary Xi Jinping appears allied with our President — and with President Vladimir Putin, to eradicate the Deep State world-wide, not only in the USA.

Learn more about the Corporation concepts:

Alert Reader provides the below comment and two documents.

There are four jurisdictions at play. Soil, Land, Sea, and Air.

Soil and Land = We the sovereign people with complete independence and self-government. Men and women in who the blood flows and the flesh lives. Lawful people. Always non incorporated as individuals, and corporate as groups. They have full constitutional and treaty rights.

Sea = British Territorial service contractor. Always incorporated. Legal Persons (personas) existing only on paper. They have NO constitutional or treaty rights. They only have rights as employees of the corporations they work for. In the US government as you know it they are the Republicans.

Air = Roman MUNICIPAL service sub-contractors. Always incorporated. Legal Persons (personas) existing only on paper. They have NO constitutional or treaty rights. They only have rights as employees of the corporations they work for. In the US government as you know it they are the Democrats. 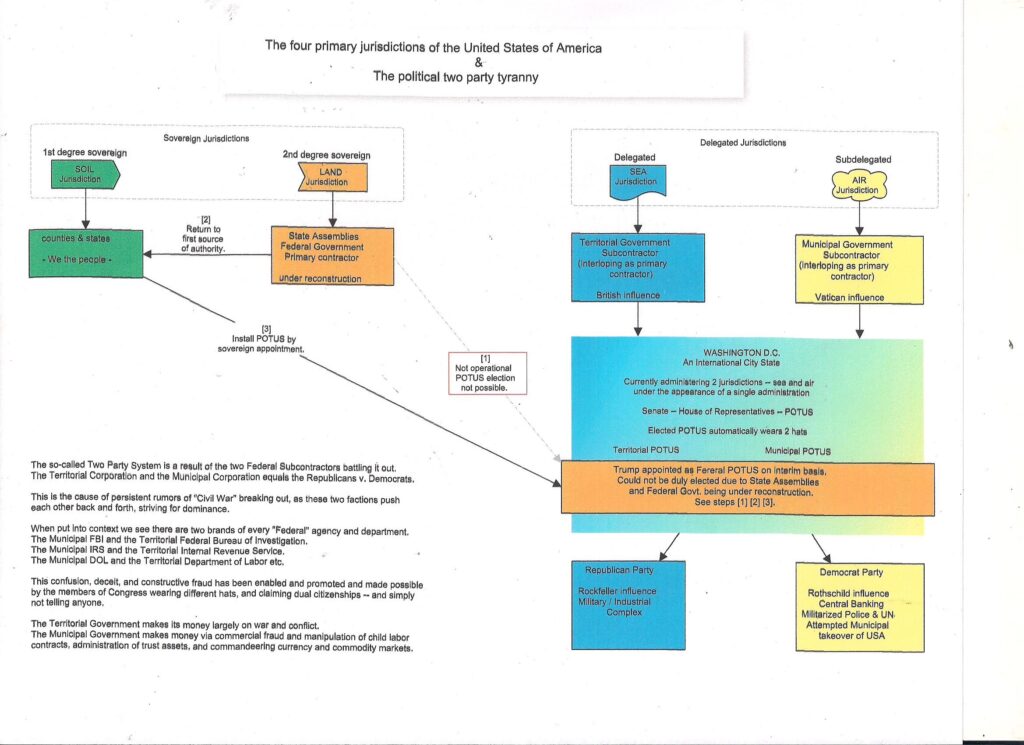 Above and two other graphics in first PDF below, worthy of close study.