DR. ROY GODSON was elected president of the National Strategy Information Center in 1993. He is also professor of government at Georgetown University  His focus on the nexus between organized criminal gangs and corrupt governments will remain a critical factor in devising sustainable global strategies for creating a prosperous world at peace.  He is also gifted at communicating the variations of intellectual understanding of strategy–his co-editd book, Security Studies in the 21st Century, remains seminal.  Below is his contribution OSS ’01.

Alessandro Politi was “present at the creation” in 1992, and on that occasion, while not a speaker, coined the term “intelligence minuteman” over dinner, and was instantly recognized as a thought leader.  he went on to pioneer modern OSINT within Italy as well as the Western European Union.

Click on the Frog to connect to his article about the “intelligence minuteman” concept as ultimately published in the International Journal of Intelligence and Counterintelligence.

PLATINUM Edwards, Detective Steve Edwards, MBE, UK
Detective Steve Edwards, Member of the British Empire, has been the foremost law enforcement pioneer in the field of Open Source Intelligence (OSINT), and it is with heartfelt admiration that we applaud his recent recognition by the Queen of England.  His gentle, self-effacing, sober appreciation of the nuances of crime, private sector offerings, and government needs for innovation have enabled him to bring disparate personalities and capabilities together in a  most effective manner. 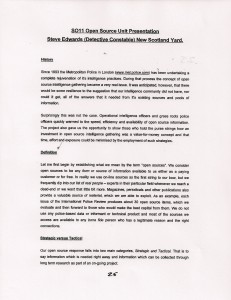