Politicians love to talk about cutting taxes in order to stimulate the economy and create jobs, but do tax cuts really trigger economic growth? 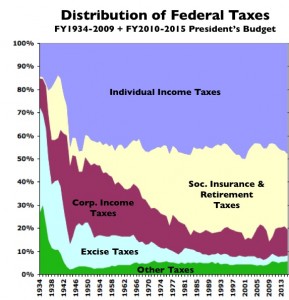 Let’s look at the federal government’s tax take.  The attached chart portrays the portrays how each category of taxes changed as a percentage of the Federal Government’s total tax receipts since 1934.  It tells us that income taxes fluctuated up and down but remained relatively constant  as a percentage of the total tax take since 1946.  The biggest percentage increase occurred in Social Security and Medicare taxes, which also happen to be the most economically regressive taxes in the tax structure (i.e., the tax burden is relatively higher for those at lower incomes than for those at higher incomes).  The biggest share declines occurred for corporate income taxes, excise taxes, and other taxes (estate taxes, customs duties, and miscellaneous taxes).