On Aug 9, 2010, Wired carried the below chart of the evolution of Taliban attacks between 2004 and 2009. This chart was constructed from the now notorious Wikileaks data base by Drew Conway, a graduate student at NYU, using the open source statistical analysis program known as “R.”

Below these I provide three historical charts, and after my comments, a chart of the Mongol invasion, the only one with lasting influence–but also a failed invasion and occuption.

In one sense, Conway’s does not tell us anything new — anyone who reads the newspapers knows Taliban attacks have been increasing. But in another sense, it is a useful addition to our knowledge, because it shows the breadth and scale of the increased intensity of combat. (Bear in mind, the wikileaks data base is not a scientific source of data, it is a compilation of reports of contemporaneous events. They can be thought of as snapshots of a complex moving scene. No doubt, these reports became more frequent and covered more territory as we increased the number of people writing these reports and as these people spread throughout Afghanistan. No doubt, there are other biases in the database. On the other hand, it is the most comprehensive source of information publicly available and its shear volume gives it gravitas.

Conway’s charts also provide grist for another comparison patterns — in Figure 1 (attached JPEG file) the three maps below Conway’s six charts show the historic invasion routes of Afghanistan by Alexander the Great (330-327 BC, the British (1838-1842), and the Soviets (1979-1989 — the shaded arrow is the airborn coup de main launched at the beginning of the campaign). I constructed these charts from multiple historical sources, and they show general lines of movements, not specific incidents.

Nevertheless, this comparison makes clear that our current war will be one or lost on the same ground as the earlier conflicts — namely, the regions around what is now called the ring road, which encircles the most rugged central mountains (all of Afghanistan is rugged). With one exception (that I know of), war in Afghanistan has always resembled guerrilla war with the locals retain the initiative in hit and run attacks that wear down the invader by attacking the invader’s long vulnerable lines of communication in the “ring road” regions. That exception is the Mongol invasion in the 13th century, which swept through the mountains shown in Figure 2(attached JPEG file). What may also be unique about the Mongol invasion is that it may have had the most lasting impact on Afghanistan in an historical sense — it changed the ethnic mix of the country. Today, Mongol influence can be seen clearly in physical features the Hazara people, who have a unique culture, and who occupy the forbidding center of Afghanistan. The Budda monuments destroyed by the Taliban in the 1990s were in Hazara territory. Alexander left names of cities and a heroic legend (albeit he had to bribe tribes to let him out through the Khyber Pass), the British and Soviets left legends of defeats. And the Americans … it beginning to look like a familiar script is being written 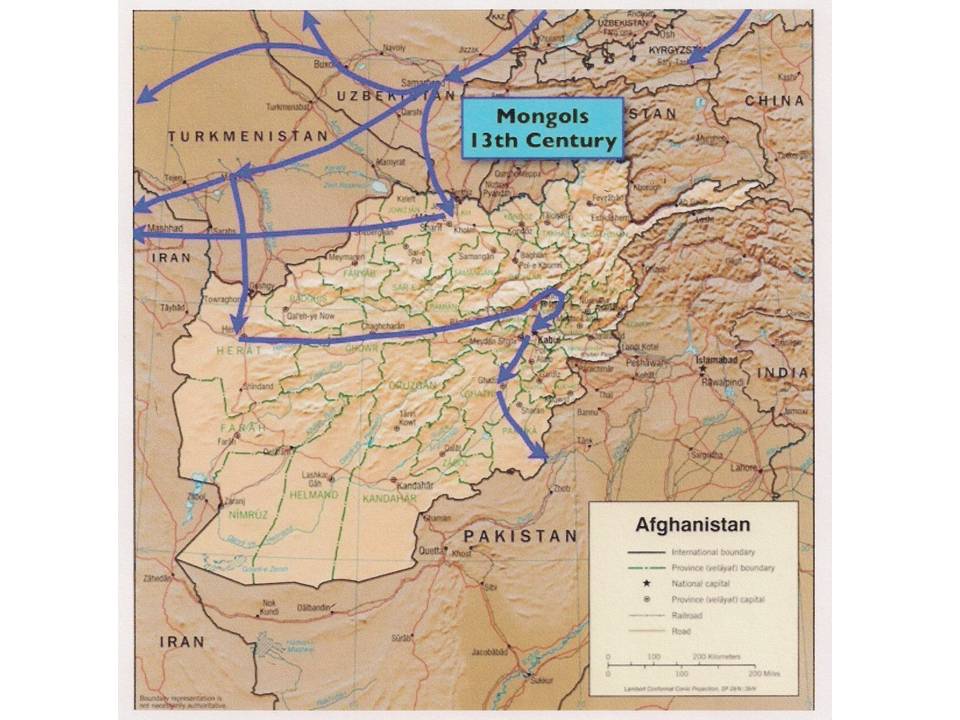