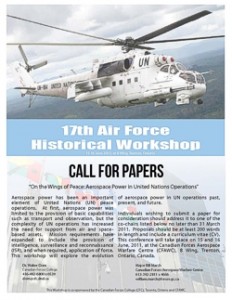 Aerospace power has always been an important element of UN peace operations. At first, aerospace power was limited to transport and basic observation, but the complexity of UN operations has increased the need for support from air and space-based assets. Mission requirements have expanded to include the provision of intelligence, surveillance and reconnaissance (ISR), and when required, the application of force. This workshop will explore the evolution of aerospace power in UN operations past, present, and future.

Individuals wishing to submit a paper for consideration should address it to one of the co-chairs listed below no later than 31 March 2011. Proposals should be at least 200 words in length and include a curriculum vitae (CV). This conference will take place on 15 and 16 June, 2011, at the Canadian Forces Base Trenton, CFAWC, 8 Wing, Trenton, Ontario, Canada.