EDIT of 18 Oct 2012:  The second nuclear catastrophe in Japan is IMMINENT.  The flooding is, like the magnetic field flip, a 100-150 year evolution (see second reference below).  Not yet being discussed is the fact that when sea water rises, it will flood and contaminate aquifers that have gone shallow.  Naturally one anticipates that renewable power and water desalination and purification will be freely available in the future.

These maps are going mainstream.  There are very weak signals that the US government and Wall Street are quietly freaking out at the highest levels and stealing what they can while they can, on the assumption that the “debt” will become irrelevant in the aftermath of a combination of catastrophes in the 2012 time-frame.

Our confidence that 2012 is a year is awakening rather than catastrophe is now revised.  It may be both. 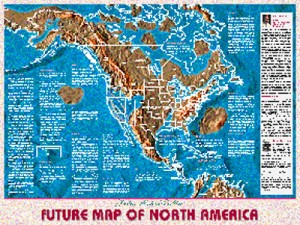 The core second point that is emerging in public intelligence is the implication of flooded nuclear plants that go critical underwater and make the seas radioactive.  It is clearly both unlikely and perhaps impossible to shut down all these nuclear reactors and evacuate their waste.  When combined with tens of millions of rotting corpses in the oceans, the problem of clean safe water becomes interesting.

The third point, much much submerged (pun intended) beneath the catastrophic sea level change and the nuclearization of water, is the possible “first disclosure” of extra-terrestials, whom we believe to be both benign and mixed–greens and grays, at a minimum.  The lead thinkers we know are closing down their traditional businesses and heading for high ground with clean aquifer water.  The future will be interesting.

It pains our collective to observe that the US Intelligence Community is completely useless in service to the public.  A national intelligence community that had integrity and could produce intelligence (decision-support) would be all over this, and would refuse orders from unethical self-serving politicians to keep their findings secret.

It’s time America got its house in order.  Public intelligence in the public interest is a good starting point.

Graphic: US Counties Protected by Levees

WATER Central to Man Against Nature