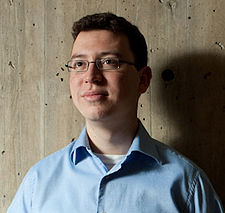 Luis von Ahn is a young computer scientist working at the intersection of cryptography, artificial intelligence, and natural intelligence to address problems of profound theoretical and practical importance.  Focusing on the 9 billion hours a year that people play solitaire, he has conceptualized means of harnessing that “cognitive surplus” to accomplish important micro-tasks, such as labeling images.

Born in 1979 in Guatemala City, Guatemala he is an entrepreneur and an associate professor in the Computer Science Department at Carnegie Mellon University[2]. He is known as one of the pioneers of the idea of crowdsourcing. He is the founder of the company reCAPTCHA, which was sold to Google in 2009.[3] As a professor, his research includes CAPTCHAs and human computation[4], and has earned him international recognition and numerous honors. He was awarded a MacArthur Fellowship (a.k.a., the “genius grant”) in 2006,[5][6] the David and Lucile Packard Foundation Fellowship in 2009, a Sloan Fellowship in 2009, and a Microsoft New Faculty Fellowship in 2007. He has also been named one of the 50 Best Brains in Science by Discover Magazine, and has made it to many recognition lists that include Popular Science Magazine‘s Brilliant 10, Silicon.com’s 50 Most Influential People in Technology, Technology Review‘s TR35: Young Innovators Under 35, and FastCompany‘s 100 Most Innovative People in Business.

Siglo Veintiuno, a leading newspaper in Guatemala, chose him as the person of the year in 2009. In 2011, Foreign Policy Magazine in Spanish named him the most influential intellectual of Latin America and Spain.[7]