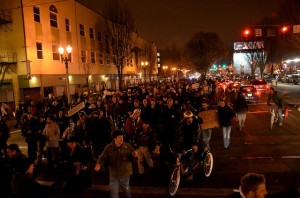 Here’s a small/cool example of tactical innovation that Portland Occupy developed (very nice article by Lester Macgurdy).   It advances the promise of keeping a camp and works in practice.  The only problem is the lack of coverage it has gotten (which limits its impact).

The Portland Occupation stumbled upon a tactical innovation regarding occupying public spaces. This evolution in tactics was spontaneous, and went unreported in the media…

Now, to move on to the actual application of these tactical principles (that evolved by accident rather than conscious thought), we can take the example of Shemanski park on the 3rd.

We occupied the park and set up a few tents and facilities to serve food and coffee. The police soon declared an emergency closure of the park and came out in force, with full riot gear and all the weaponry. The line of riot cops soon forced us out of the park, so someone decided that we ought to march to City Hall. It was about 9 pm on a Saturday night, so City Hall was closed, but we marched there anyway, 800 of us blocking traffic the whole way. Once there, the riot cops once again lined up to disperse the crowd. However, since City Hall was closed and there was no point in staying there anyway, someone had the idea to march down to the area of town where all the clubs were, so we took off marching again. The riot cops were trailing behind us…

After marching for 3-4 hours, we eventually found ourselves a block away from the park that we’d been forced out of, so we took it again. The riot police lined up and prepared to take the park again, but the attempt was called off and the police just left. They realized that they would have to go through the standard military procedure of clearing the park inch by inch, only to have us go back out into the streets and march again while they, one more time, trailed along helplessly- their entourage functioning as a part of the march, creating an even larger disruption to traffic (the marchers covered a city block, the trailing police took up another city block, effectively doubling the size of the obstruction to traffic)…