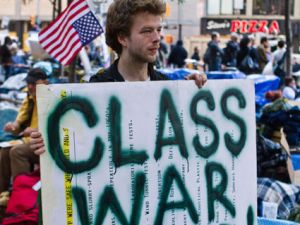 The superrich have drawn a clear line in the sand between themselves and everybody else. How did we get here?

And here was another thing many in the middle class were discovering: The downward plunge into poverty could occur with dizzying speed. One reason the concept of an economic 99 percent first took root in America rather than, say, Ireland or Spain is that Americans are particularly vulnerable to economic dislocation. We have little in the way of a welfare state to stop a family or an individual in free-fall. Unemployment benefits do not last more than six months or a year, though in a recession they are sometimes extended by Congress. At present, even with such an extension, they reach only about half the jobless. Welfare was all but abolished 15 years ago, and health insurance has traditionally been linked to employment.

In fact, once an American starts to slip downward, a variety of forces kick in to help accelerate the slide. An estimated 60 percent of American firms now check applicants’ credit ratings, and discrimination against the unemployed is widespread enough to have begun to warrant congressional concern. Even bankruptcy is a prohibitively expensive, often crushingly difficult status to achieve. Failure to pay government-imposed fines or fees can even lead, through a concatenation of unlucky breaks, to an arrest warrant or a criminal record. Where other once-wealthy nations have a safety net, America offers a greased chute, leading down to destitution with alarming speed.