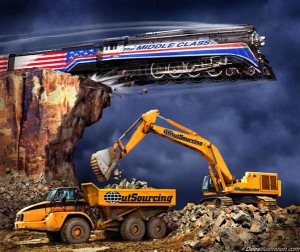 Once upon a time, the United States had the largest and most vibrant middle class that the world has ever seen. Unfortunately, that is rapidly changing. The statistics that you are about to read prove beyond a reasonable doubt that the U.S. middle class is dying right in front of our eyes as we enter 2012. The decline of the middle class is not something that has happened all of a sudden. Rather, there has been a relentless grinding down of the middle class over the last several decades. Millions of our jobs have been shipped overseas, the rate of inflation has far outpaced the rate that our wages have grown, and overwhelming debt has choked the financial life out of millions of American families. Every single day, more Americans fall out of the middle class and into poverty. In fact, more Americans fell into poverty last year than has ever been recorded before. The number of middle class jobs and middle class neighborhoods continues to decline at a staggering pace. As I have written about previously, America as a whole is getting pooreras a nation, and as this happens wealth is becoming increasingly concentrated at the very top of the income scale. This is not how capitalism is supposed to work, and it is not good for America.