On Saturday, Occupy Oakland re-entered the national spotlight during a day-long effort to take over an empty building and transform it into a social center. Oakland police thwarted the efforts, arresting more than 400 people in the process, primarily during a mass nighttime arrest outside a downtown YMCA. That number included at least six journalists, myself included, in direct violation of OPD media relations policy that states “media shall never be targeted for dispersal or enforcement action because of their status.” 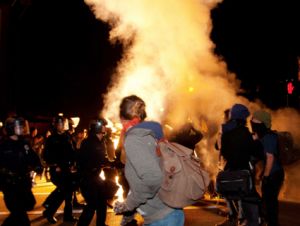 After an unsuccessful afternoon effort to occupy a former convention center, the more than 1,000 protesters elected to return to the site of their former encampment outside city hall. On the way, they clashed with officers, advancing down a street with makeshift shields of corrogated metal and throwing objects at a police line. Officers responded with smoke grenades, tear gas, and bean bag projectiles. After protesters regrouped, they marched through downtown as police pursued and eventually contained a few hundred of them in an enclosed space outside a YMCA. Some entered the gym and were arrested inside.

As soon as it became clear that I would be kettled with the protesters, I displayed my press credentials to a line of officers and asked where to stand to avoid arrest. In past protests, the technique always proved successful. But this time, no officer said a word. One pointed back in the direction of the protesters, refusing to let me leave. Another issued a notice that everyone in the area was under arrest.