Douthat apparently has not read that book, A Fine Madness, Paul or a better grounded iconoclast may be exactly what the country needs.

IN 1984, after serving three terms in the House of Representatives, Ron Paul was defeated by Phil Gramm in Texas’s Republican Senate primary. Paul left Congress, and a few years later he left the Republican Party entirely to run for president on the Libertarian line. In the 1988 election, after a campaign that Texas Monthly compared to something “out of Robert Altman’s movie ‘Nashville,’ ” he took home just 0.47 percent of the popular vote. 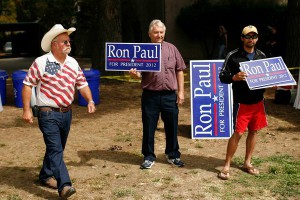 Thus marginalized by the public, the former congressman proceeded to marginalize himself. Through the various newsletters that bore his name — most notably the Ron Paul Political Report and the Ron Paul Survival Report — he spent the early 1990s as a peddler of far-right paranoia. In an exhaustive 2008 piece for Reason magazine, Dave Weigel and Julian Sanchez argued that the most abhorrent language in Paul’s eponymous newsletters — the claims that the Rev. Martin Luther King Jr. “seduced under-age girls and boys,” that AIDS sufferers “enjoy the attention and pity,” and so on — weren’t actually written by the man himself. But the fact that they had Paul’s imprimatur suggests that the former congressman had grown comfortable way out on the xenophobic fringe.

Full article below the line.

That fringe is like the Hotel California: When public figures hang out there for a while, they usually find that it’s easier to check out than to leave. Yet in 1997, Paul was back in Congress, representing the same Republican Party that he’d previously abandoned. In 2008, after a decade as a marginal figure on the Hill, his long-shot campaign for the presidency suddenly gained him one of American politics’ most devoted followings. And now this following has grown large enough that a man whose Survival Report once counseled would-be militia members to “avoid the phone as much as possible” has a chance to win the Iowa caucuses.

There are two commonplace interpretations of Paul’s unusual trajectory. To his many sympathizers — libertarians, dissident conservatives and some left-wingers as well — the extremism in his past has nothing to do with the issues that he’s campaigning on today. The case for Paul, as The Atlantic’s Conor Friedersdorf put it, is that “he alone, among viable candidates, favors reforming certain atrocious policies” — scaling back America’s overseas commitments, ending a failed war on drugs, curbing a runaway public sector and reducing the powers of an imperial presidency. The newsletters may reflect badly on his past, but in the current political landscape he’s a voice of reason rather than of madness.

To his many critics, on the other hand, Paul’s present-day positions are connected to his past derangements, because they share the same essentially conspiratorial root. Then as now, Paul blames shadowy elites for the country’s ills; then as now, he flirts with narratives that are straight out of the fever swamp. For all its superficial idealism, the critics insist, his campaign is a conduit through which fundamentally poisonous ideas are entering the mainstream body politic, and thus he needs to be not only defeated but repudiated.

But consider a third possibility. There’s often a fine line between a madman and a prophet. Perhaps Paul has emerged as a teller of some important truths precisely because in many ways he’s still as far out there as ever.

The United States is living through an era of unprecedented elite failure, in which America’s public institutions are understandably distrusted and our leadership class is justifiably despised. Yet politicians of both parties are required, by the demands of partisanship, to embrace the convenient lie that our problem can be pinned exclusively on the other side’s elites — as though both liberals and conservatives hadn’t participated in the decisions that dug our current hole.

In this climate, it sometimes takes a fearless crank to expose realities that neither Republicans nor Democrats are particularly eager to acknowledge.

In both the 2008 and 2012 campaigns, Paul has been the only figure willing to point out the deep continuities in American politics — the way social spending grows and overseas commitments multiply no matter which party is in power, the revolving doors that connect K Street to Congress and Wall Street to the White House, the long list of dubious policies and programs that both sides tacitly support. In both election cycles, his honest extremism has sometimes cut closer to the heart of our national predicament than the calculating partisanship of his more grounded rivals. He sometimes rants, but he rarely spins — and he’s one of the few figures on the national stage who says “a plague on both your houses!” and actually means it.

Obviously it would be better for the country if this message weren’t freighted with Paul’s noxious baggage, and entangled with his many implausible ideas. But would it be better off without his presence entirely? I’m not so sure.

Neither prophets nor madmen should be elected to the presidency. But neither can they safely be ignored.