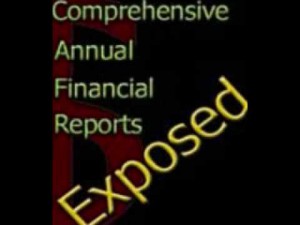 Our local government agencies may be whining about the budget and how they don’t have enough money resulting in higher taxes, cutting services or both. They cite a budget shortfall and need us to dig them out now! Next time this happens ask them to look at the cash account on the statement of net assets from the comprehensive annual financial report. Say what is a CAFR?

Every governmental agency produces this document by law yet the Federal version is a labyrinth compared to the State level on down. It’s simply a statement to the wealth of the government, the sum total of everything we’ve entrusted them with. Would you say they’re doing a lousy job? When we don’t have the money from a paycheck we dip into savings and the government has done a great job of saving a giant pile of your money! In the past few years a few politicians have begun to question these savings demanding at least a discussion of them. Here is a story from Oregon detailing one such discussion on how to use the funds.

Recently the most famous case has been CA with their deficits yet lets check the 2010 CAFR, pg 46 they have $25 BILLION sitting in the cash account alone which is invested in federal treasuries and other short term investments. This is the total of decades of over collecting taxes, taking too much from us and yet some of the same people who know this come begging us to pay more taxes! They had over $11 BILLION in receivables; I wonder what the past due ratios are!?

The government isn’t a for profit company is it? Wasn’t this social contract a giant trust agreement anyway? There is money sitting in the coffers of these government accounts that are controlled by who? That’s the real question as you dig deeper and deeper you start to look at pension funds and where that money gets invested and you sum total all the various lower levels on up and the big picture doesn’t really surprise you. Time is short so I won’t digress into that so lets focus on what we can do.

Look yours up! Google  “Comprehensive annual financial statement” (not “CAFR”) and the name of the government entity being researched (lottery, school district, water district, city, county, or state etc). Find the statement of net assets, look at the first line, this is cash! It might be held in short term government debts but its liquid like cash. Lets start forcing this question to be answered whenever we interact with them! Let’s ask the hard questions!

There is a lengthy 3 hour documentary on the extent of this scam by Walter Burien who runs a website CAFR1.com detailing the extent of this duplicity. Time is short and the time to act is now so get a handle on the basic idea and just go with it. Look up as many as you can but Walter has most of them listed on his site to  save some time. For a great analogy check out this article. Tell everyone who will listen but it is hard to accept, they programmed us well. Time to take the red pill folks.

Tip of the Hat to Patrick Ivy.

Watch 9:59 Video and Learn Much More