The Great Green Wall Of Africa — A 4,000 Mile Defense Against Climate Change

One of the most unique large-scale international climate change projects is underway in Africa. A 4,000 mile “wall of trees” is being constructed across the east-west axis of the continent as a defense against rapid, expanding desertification of the Sahara.

11 nations — Mauritania, Senegal, Mali, Burkina Faso, Niger, Nigeria, Chad, Sudan, Ethiopia, Eritrea, and Djibouti — have agreed to participate in The Great Green Wall initiative (GGW), planting a contiguous “wall of trees” stretching 4,300 miles long and 9 miles wide, across the entire width of the African continent from Djibouti in the east to Senegal on the west. 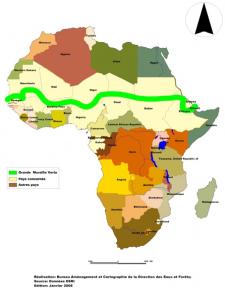 The project was approved by the African Union in 2007, under the umbrella of the  Community of the Sahel-Saharan States (CEN-SAD). In 2008, the first trees were planted along the wall’s path.

Progress (and reporting) currently varies from nation to nation; the process is still in its infancy and will take several years to complete. Nevertheless, the project is already showing some success: a World Food Program (WFP) report from Senegal details how villages in Widou Thiengoli are now harvesting fresh fruits and vegetables from the dry desert sands, a by-product of the Wall initiative. Some 50,000 acres of trees have already been planted in Senegal, according to press reports.

Desertification has emerged as a “major planetary threat” with particularly daunting challenges for Africa. Climate change has led to prolonged periods of drought and other symptoms of desertification, which are being experienced by a growing number of countries. The UN Food and Agriculture Organization (FAO) reports that two-thirds of the African continent is classified as desert or dry lands. Rainy seasons and other weather patterns — long consistent – are now changing across the region. In Senegal, for example, the rainy season now begins in September — it traditionally started in July.

The UN estimates that two-thirds of Africa’s arable land could be lost by 2025 if this trend continues.

According to the Great Green Wall website, the goal is to help mitigate the environmental effects of climate change, including the expansion of desertification.   The trees will act as a barrier against desert winds, help to hold moisture in the air and soil, reduce erosion, enhance biodiversity, provide new grazing land and be a source of vegetation. The project is also recognized for the role it will play in local agriculture and employment.

“People used to go to towns to seek paid work during the lean season, but since the project started, that has changed,” says Papa Sarr, Technical Director of the Senegal National Agency of the Great Green Wall.

The Great Green Wall has received a total of $1.8 billion dollars from the World Bank and another $108 million from the Global Environment Facility.
Ulrich Apel, a forestry expert with GEF, said the program could serve as a model for similar projects around the world in areas, such as central Asia, which face similar challenges in adapting to a rapidly changing climate.

The Green Wall, said Apel, “is off to a promising start.” Standing near a row of waist-high trees in Widou village – one of Senegal’s Green Wall locations — he said: ”In 10 to 15 years this will be a forest. The trees will be big and this region will be completely transformed.”