How Much Is Peace Actually Worth?

According to an emerging branch of economics, approximately $9.46 trillion.

The most recent study published by the Institute for Economics and Peace (IEP) found that violence cost the world $9.46 trillion in 2012 alone. That’s 11 percent of gross world product. By comparison, the cost of the financial crisis was just 0.5 percent of the 2009 global economy.

Jurgen Brauer and Paul Dunne, editors of The Economics of Peace and Security Journal and co-authors of Peace Economics: A Macroeconomic Primer for Violence-Afflicted States, define “peace economics” as “the economic study and design of political, economic, and cultural institutions, their interrelations, and their policies to prevent, mitigate, or resolve any type of latent or actual violence or other destructive conflict within and between societies.” In other words, how does peace affect the economy, how does the economy affect peace, and how can we use economic methods to better understand them both? These are not new topics for economics, Brauer says. But the research questions have usually used the word “war” instead of “peace.”

What’s the difference? Simply the absence of violence and war is what researchers call “negative peace.” It’s only part of the picture. “Positive peace” is the presence of the structures, institutions, and attitudes that guarantee a sustainable social system and the freedom from all forms of violence. Measuring the absence of violence is easy enough, relative to its presence, but assessing all the nuances of a sustainable social system is considerably more difficult.

With comprehensive and nearly global data on the absence of violence, it becomes possible to test for coinciding social structures. This gives us a picture of positive peace. After statistically analyzing the relationship between GPI scores and approximately 4,700 cross-country data sets, IEP has identified groups of indicators, like life expectancy or telephone lines per 100 people, that it considers the key economic, political, and cultural determinants of peacefulness. IEP calls the resulting eight categories the “Pillars of Peace”: a well functioning government, equitable distribution of resources, free flow of information, a sound business environment, a high level of human capital (e.g., education and health), acceptance of the rights of others, low levels of corruption, and good relations with neighbors. 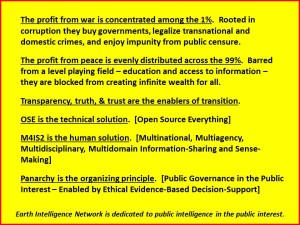 Phi Beta Iota: This is a hugely important work, and perhaps one day a candidate, in partnership with others such as Herman Daly, author of Ecological Economics, for a Nobel Prize.  The idea is not new — John Maynard Keynes among others offered it up first — but for the first time, the Internet makes it possible for ideas like this, once easy to isolate, to gain traction with an engaged public. As we have been saying for some time here at this website, peace is vastly more profitable than war, the difference is that war profits the few who corrupt governments, while peace profits the many that rely on governments to govern, ideally with integrity.