With salt water as its fuel, which it converts to electricity, it has a top speed of over 200 mph and has now been approved for public road use in Europe.

A car which uses an electrolyte flow cell power system is now certified for use on European roads. The car is called the Quant e-Sportlimousine, which made its debut at the 2014 Geneva Motor Show. 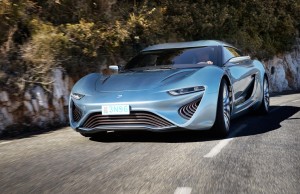 “The power density of the nanoFLOWCELL® at 600 W per kilogram or per litre is greater than any comparable system; five times greater, to be specific. That means you can drive five times further with our system than you can with a conventional battery system, including the most state-of-the-art lithium-ion batteries. The system is also extremely safe to operate and environmentally friendly. Most importantly, since there are almost no moving parts and it produces negligible waste heat, it has an efficiency of more than 80%. There has never been anything like it.”