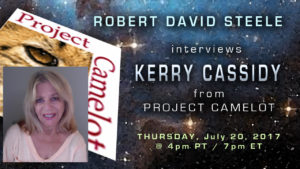 Robert Steele Comment and Planned Questions Below the Fold.

ROBERT STEELE: After the hit job on me by the elite pedophiles terrified of my sponsorship of a book on pedophilia that could take them down (along with Julian Assange’s holdings that I expect will be released in  time to impact on the 2018 election), I decided to pay more attention to both extraterrestrial and intraterrestial matters. While I have direct sources that confirm that we have had a base on Mars for at least fifteen years, and that there are 10,000 people there today who are never coming back to Earth, my focus has been on restoring integrity to the US Government (USG) through a civics education program known as #UNRIG. That is still my primary focus. Until we have an honest Congress responsive to its constituents instead of those who bribe, blackmail, and manipulate with lies each of our Members, we will not be able to do evidence-based decision-making in the public interest, and we will not be  able to do line-item transparency of the USG budget.

The National Aeronautics and Space Administration (NASA), like the rest of the USG, lies about everything and appears to have considerable off-budget resources, possibly based on official USG drug operations against our own citizens, and USG participation in the rigged stock market. The Pentagon did not “lose” 2.3 trillion dollars as some believe — they simply consider themselves above the law and refuse to tell Congress they have spent that money on extraterrestrial and intraterrestial activities inimical to the public interest.

I decided I could render a useful public service by interviewing Kerry Cassidy, arguably the foremost citizen investigator in this domain. Below are the questions I am going to ask her. The listeners can judge for themselves her depth and breadth of knowledge — my intent is to create a public baseline, an executive summary of her collective work over time — in sharp contrast to the lies being told by NASA. The truth at any cost lowers all other costs.  This is my signature phrase (I am also committed to truth & reconciliation, so NASA officials need not fear me — my version is “everyone gets the truth, no one goes to jail.” I am committed to election reform as a means of helping the public gain access to the truth about every aspect of our government, economy, and society. NASA is now in my headlights.

1. How did you get started down the road with Project Camelot?

2. What is the secret space program and where are we on a secret government of Earth?

3. When and how have Nazis infiltrated NASA and where are they grouped within NASA today?

4. Who are the best of the whistleblowers and what is their psychology and ethical disposition?

5. What is the relationship between the Deep State, pedophilia, Satanism, and the Reptilian agenda?

6. What is a supersoldier, how many of them are there, where are they based, and why do they matter?

7. extraterrestrials — how many races, which ones are active here now, what is their agenda?

8. How important is time travel and portal/stargate technology? Did we have a set-back in 2009-2012?

9. How important is artificial intelligence or what I call it, artificial stupidity? Is the 5G grid actually a clear and present threat to all of humanity?

11. Describe the Illuminati at the highest levels and tell us briefly about their agenda.

12. Who are We the People? What does it really mean to be human, what is the rebel gene, and how do you explain the failure of all of the targeted nano-technology embedded in vaccines, the chem trail seeding of activatable particles, and so on?

LIVE TONIGHT (7 pm Eastern): Robert David Steele on the Deep State & Everything Else, Interviewed by Kerry Cassidy of Project Camelot

Robert Steele with Alex Jones: The Three Minutes on Pedophilia that Top Pedophiles Absolutely Do Not Want Anyone to See…

Worth a Look: Project Camelot