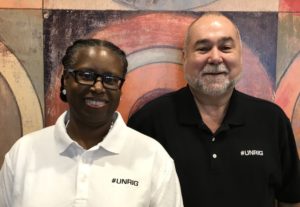 #UNRIG Seeks to Organize PowerCells in Each Congressional District — Focus on People, Not Parties, on Truth not Lies, on Action not Apathy

ATLANTA, GA – Dr. Cynthia McKinney, the former six-term Congresswoman from Georgia and co-founder of Earth Intelligence Network’s project #UNRIG, has launched a nationwide recruitment drive today for “PowerCell” members, that is, individuals across the political divide who will unite to work to restore truth and integrity to governance and build support to #UNRIG the system at all levels – local, state, and national.

“We want to operationalize what it means to take our country back, ethically and non-violently.  A first step is teaching citizens how the 1% divide and conquer the 99%,” said McKinney.  “We must all understand, based on history, how the powerful, via the media and entertainment industry, create a culture that facilitates divide and rule.”

“The central aspect of our educational project is to focus on people, not parties, on the truth instead of the false narratives prevalent in both mainstream and social media,” McKinney said.“  Each PowerCell will unify and integrate voices from across the political, racial, and gender spectrum.  By its very nature, a PowerCell enables direct democracy and defeats special interests.”

Robert David Steele, EIN CeO recently recommended for the Nobel Peace Prize, is developing a direct democracy “app” that enables citizens to access truthful information about and then vote on every piece of proposed legislation at the line item level, so as to instruct their Representatives on how they must vote.

“Information technology now makes possible the education and mobilization of citizens across every Congressional District,” Steele says. “In combination with citizen demands for an election reform act that clears up the twelve specific points of failure in what we have now, this ends the grip of the 1% on government, and reinstates – ethically and without violence – the 99% as the foundation for a government that is Of, By, and For We the People.”

McKinney will provide coaching to PowerCells via webinars and direct engagement, while Steele organizes the development of the free app to be beta tested by registered PowerCell members.

Individuals can learn more at http://unrig.net.  Donations can be made via IndieGoGo-UNRIG. Registered voters can sign up to become a PowerCell participant by emailing contact@unrig.net with their name, Congressional District, and hometown within that District.

Earth Intelligence Network is a not-for-profit, 501(c)(3) educational corporation, headquartered in Virginia. The original purpose and long-term focus of Earth Intelligence Network is to teach citizens the urgency of demanding holistic analytics, true cost economics, and Open Source Everything Engineering (OSEE) as the foundation for enlightened self-governance. #UNRIG© is an educational campaign to communicate to all citizens the possibility of an ethical, legal, non-violent restoration of integrity to the United States Government. For more information, visit www.earth-intelligence.net/ and www.unrig.net.