The IC inability to leverage external expertise is rooted in a number of factors:

02 lack of structures, funding, and mind-sets for external exploitation of experts on all topics in all languages and mediums — this includes the obvious cut-outs to conceal the fact that we are asking X.

03 a security mind-set that demand that all those brought into the fold (to whom questions are revealed) be eligible for and receive security clearances — and in CIA’s case, the explicit forbidding by the clandestine service of direct contact with Subject Matter Experts (SME) by the CIA’s Open Source Enterprise which has never appeared to be competent at anything.

05 a complete disrespect for the importance of leveraging knowledge in multiple languages on the same topics, and sets of experts from multiple countries on the same topic (for one project we used 29 languages including Catalan, Gaelic, and Polish to identify and evaluate 396 terrorist, insurgent, and opposition websites) — I would NEVER try to understand the Spratley Islands, to take one example, without consulting Chinese, Vietnamese, and Filipino experts with access to 200 years of statements in their languages.

06 the complete laziness and ineptitude of the chosen national academic intermediaries with respect to actually doing structured multilingual research. One of my early finds was Eugen Garfield and citation analytics — I knew more about this as a freshman in college in 1970 than probably any member of multiple National Intelligence Council (NIC) cadres since then — these people are all posers. See below for the documented fragmentation of the academy. We don’t do citation analytics, we don’t do holistic multi-discplinary studies, and we absolutely do not work at all toward integrating Chinese, Iranian, Russian and other deep think ecologies — our citations of the French and Germans are cursory at best.

07 the dismissal, despite my 30 years of harping on this point, of the importance of the eight “tribes” that all have different forms of knowledge, much of it direct hands on knowledge, that demands dedicated overt case officers (not clandestine — overt). The CIA’s domestic division was supposed to be good at debriefing legal travelers but appears to have morphed into a cover up for high crimes including complicity in Mossad blackmail and pedophilia entrapment operations as well as drug running, money laundering and — I am very sad to say — trafficking in children. It is not possible to have a complete grasp of any topic without systematically polling not just academia, but civil society (labor unions, religions), commerce especially small business, government especially local, law enforcement including particularly local sheriffs, media including alternative media, miltary including reservists, and non-profits.

08 the largely retarded understanding of online search and its grotesque dysfunctionality, the next graphic. most of these people really do not understand that Google is indexing at best 3% of what is online; that what is online is at best 1% of what is known; that Google manipulates search; that PDFs are not indexed for various reasons, and so on.

09 we have never taken sense-making seriously and these has been no attempt to empower analysts with desktop analytic toolkits, backoffice processing, and more, next two graphics. 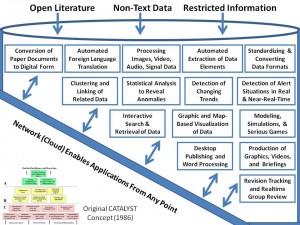 10 now in that context, look at the failure of clandestine intelligence (I will leave SIGINT to Bill Binney, suffice to say that NSA processes 1% of what it collects and has never, in its lifetime, stopped a terrorist incident, its false claims to the contrary).

11 Which leads me to the proper management of HUMINT. HUMINT consists of fifteen slices, four of which are classified. The budget for HUMINT should be tripled, with half the money spent on the four slices, and half of that half spent on counterintelligence, which today is essentially a paper tiger going through the motions.

12 The ANSWER is a combination of national Open Source Agency in which all eight tribes have offices and budgets, and a co-located Multinational Decision Support Centre that uses military watchstanders as a hub for 24/7 operations, and we put an MDSC in every country in the world. NATO would be a logical starting point, see my latest on NATO, Intelligence, and Transformation.

Open Source Everything – Agency or Company or Network or All Three?

Here is what Brigadier James Cox, LF CA and Deputy J-2 for Big NATO in Brussels concluded after watching me (and NATO and CIA) fail.

Hence, a university could indeed play a role as both a central administrator for a national open source agency and distributed network and also — my latest addition to the Open Source Agency, a national Open Source Everything Engineering (OSEE) Innovation Centre that becomes the centerpiece of a vastly expanded Diplomacy, Development, Commerce grand strategy (D3C is the acronym the Americans use for Defense, Diplomacy, Development, & Commerce — we have never been keen on avoiding war, the banks love war as a profit center and no one here represents the poor that profit form peace — the problem is that the profits from peace are widely distributed despite being greater, so there are no lobbyists for peace in America).

If the university wants to be really clever and work toward the PhD/DBA program and Open Source Everything Engineering (OSEE) Innovation Centre they could consider the below three graphics, and pitch not just intelligence and defense, but diplomacy, development, and commerce as well.

you cannot harness all knowledge unless you create channels. below is another graphic showing the circles of information in relation to the President (at the time I was thinking UN and the Sustainable Development Goals or SDG).

rule one in Washington is “lie to the President if you can get away with it.”

My second graduate thesis established that embassies collect at best 20% of what is relevant and available and spill 80% of that in how they process it (via pouch one way to one agency where it is usually thrown away).

Am not sure anyone grasps my point that everyone on the planet is an expert including the trash man who has eyes on the neighborhood and access to everyone’s trash. I would go so far as to suggest that our academic process for awarding degrees after years of meaningless rote knowledge now renders all “certified” experts as suspect, and one must look in darker corners — not where the light is — for “real” experts.

A fundamental question anyone could start with is this:

What is an expert? Publications? Degrees, Decades on site without degrees?

It turns out the answer to that depends on whether you have a holistic analytic model and whether you respect primary as opposed to secondary knowledge.  Most of what is published is secondary and 50% crap.

I focused on four levels of analysis, talked to all the analysts, and established that the level of analysis changes the threat considerably.

Now see this graphic. If you add civil and geographic experts, then everything changes in context.  US Army is no longer tracked and it is too few too heavy.

If you start with a shit model that narrowcasts what experts you seek out and listen to, you end up with shit conclusions. That’s where we are today.

Then on top of that, a further refinement, this from Henry Kissinger, intelligence is not useful to policy. No one is held accountable for making decisions (such as the assassination) without intelligence.

So the conclusion of this inquiry should ask the question:

what do we need to change about our model and our process such that we can harness all experts of all kinds in all languages, to the end of being ESSENTIAL to all decisions made by government at all levels across all mission areas?

Three of my favorite sound bites:

Do not send a spy where a schoolboy can go.

The truth at any cost lowers all others costs

to which I recently added:

The truth in  time is worth more than the truth too late.