A possible illustration seeking to relate OSINT to HUMINT particularly and other disciplines as well.  Edit if needed please.

You provided this illustration: 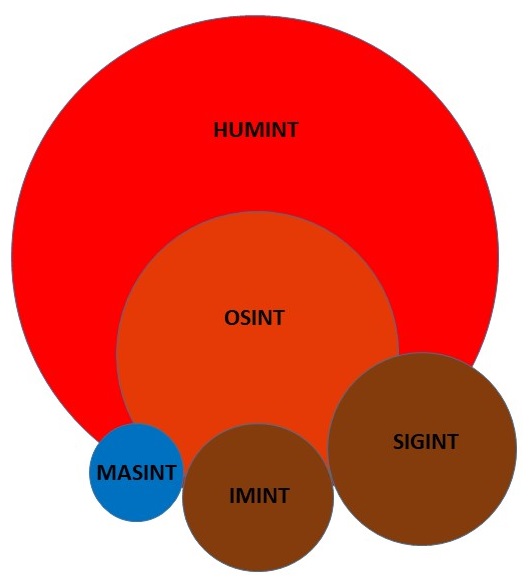 This is an interesting depiction, from the perspective of a professional in India, in part because it reflects the traditional importance of HUMINT over the three  technical disciplines (the Americans distinguish between GEOINT and IMINT as time when IMINT is being rapidly degraded by commercial options and GEOINT is not living up to its potential for lack of inter-disciplinary time and space tagging).

Now after your helping me better understand the context in India and the shortfalls of our American system with unlimited funding for unproductive technology,, I recommend you adapt your model to the following: 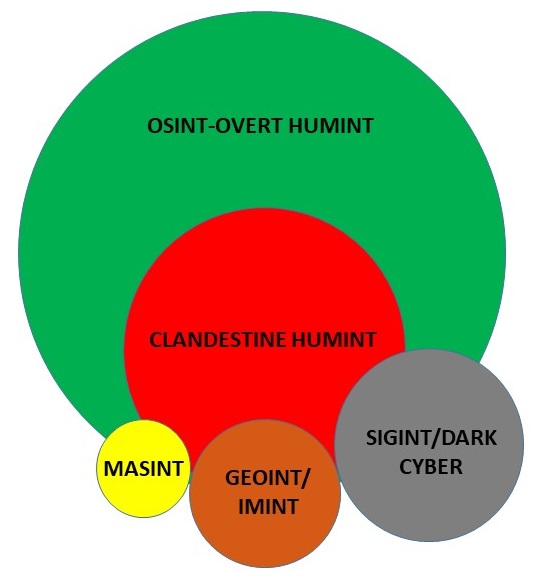 If you examine the Herring Triangle (Jan Herring was the first modern OSINT pioneer in US secret intelligence world, as the National Intelligence Officer for Science & Technology, or NIO S&T), you will intuit that OSINT — at very low cost — makes the existing clandestine HUMINT capability  twice as productive, while narrowly focusing the technical capabilities that should always be in direct support of HUMINT, not running off on their own.

I would be very comfortable with the above depiction as a starting point but I encourage you to consider the below graphics as you contemplate three major questions:

01 Should intelligence be driven by REQUIREMENTS (what do ALL of our customers need to know) or COLLECTION (how can we justify ever increasing budgets by collecting shit we don’t process hence that makes no difference)?

02 Should OSINT be what Joe Markowitz and Paul Wallner, in their most memorable contribution to the failed discipline, called “the source of first resort”? This was the conclusion the Dutch came to when Arno  Reuser was the OSINT master for the Dutch military, he is still available to help India.

03 Has the time come to end the stove-piping of collection? Do we need to integrate all of the disciplines at the tactical, theater, national AND multi-national levels?

Never forget these two graphics which are  very pro-military as a central management construct.

The military is the “natural” network within which to manage global to local intelligence and counterintelligence BUT the military is also a retarded organization in which the higher the rank the more clinically insane as well as oblivious the officer becomes — they confuse authority with integrity.

I have been pioneering in this area — with a holistic mind-set not to be found within the secret world, the Cabinet, or the White House, since 1988 officially, with holistic model development in my past back to 1974 (multinational home and host country issues), 1976 (pre-conditions of revolution), and 1987 (strategic mis-management of national security information).

I was very glad to have a tour in the Advanced Program and Evaluations  Group in the Collection Requirements and Evaluations Staff (CRES/APEG) at CIA, and very sad when Sandra Cruzman (RIP) said of the below article to Ross Stapleton-Gray, “this confirms Steele’s place on the lunatic fringe. She meant well but she  did not know what she did not know — typical of secret “bosses.”

It is worth noting that I understood all of this in 1988 from a military perspective, and that my boss in CRES/APEG, Boyd Sutton (RIP) ultimately agree with me by 1997.  Here are core military oriented references.

The people managing our national intelligence enterprise are corrupt and retarded and they like  it that way because they are not held accountable for being virtual traitors, in constant betrayal of the President as well as the public.

Study the New Rules for the New Craft of Intelligence that I refined. They have been ignored since I formulated them in 2002 because no one holds all these entitled assholes accountable for being failures.

New Rules for the New Craft of Intelligence

OSINT/HUMINT are the foundation and the  core for all-source INTEL.


The technical disciplines should be in SUPPORT of OSINT/HUMINT:

a. NSA should be providing tactical near real time SIGINT to clandestine operations overseas and counterintelligence operations at home, inclusive of 100% processing on traitors elite pedophiles, and white collar (Wall Street) criminals.

b) The All-Source Analyst should have an Open Source Agency (OSA) and global network of local to global subject matter experts on call as a starting point for addressing every requirement.

c1) The OSA says it is falling short AND

c2) The customer certifies that the cost and risk of classified collection in warranted in the absence of an OSINT answer.

I no longer favor cutting the secret world in half. I now favor consolidating everything under a restored DCI, and redirecting one  third to Global Coverage or Third World issues including the Arctic; and one third to domestic commercial and trade needs along with RUTHLESS counterintelligence against corrupt state and local officials bribed and blackmailed by the Deep State.

I continue to consider it vital to harness national intelligence toward the strategic goal of creating a Smart Nation.  No one in Washington gives a shit about creating a Smart Nation that is prosperous for the 99% and at peace with the rest of the world, with the possible exception of Donald Trump and a few of this trusted people including Mike Flynn.

Thank you for provoking me as you have.