Sir, I have made the following diagram. Please comment.  This is a draft and not a final pic, as will be the case with most of what I have been sending and will send in the future.

I am also attaching the link for a CIA OSC Okhinawa report that I had found online. Kindly comment on it.  Is it OSIF or is it a true OSINT report.?

This is an excellent diagram and I see you are drawing on my earlier distinctions in which Dr. Joseph Markowitz added OSINT-V or validated OSINT. Our definition of Validated OSINT is that it is either confirmed or — just as valuable — not contradicted — by classified sources available to the responsible subject matter analyst expert.

I like your innovation in putting Black OSINT at the top but it is important to understand that Black OSINT refers to openly available information (generally Gray Literature and more often than not analog in-country rather than online) that is so revealing that it SHOULD be classified. A simple example now known is online translation — I have been astonished by the number of classified and corporate confidential and scientific & technical insights that have been available in the cloud because those using translation software have not realized that everything they have been translating has not only been collected by NSA but is also available via other paths into the cloud.

It is in my view important to always show OSINT in relation to the other secret disciplines. While OSINT can answer at least 80% if not more of the intelligence (decision-support) requirements of most customers including defense customers, in the past ten years I have become much more respectful of both counter-intelligence, and of the ability of clandestine and signals intelligence particularly to provide vital counter-intelligence — for example, proof of treason, elite pedophilia, and white collar crime in agriculture, commerce, defense, diplomacy, education, transportation, and more.

Here are two graphics I came across while looking for the above graphic.

RANDOM above refers, for example, to a flag officer talking to a taxi driver and concluding that his intelligence people are full of shit because the taxi driver makes more sense.  More often than not this will be a correct conclusion. A MAJOR pathology within the secret intelligence world is that they live in a bubble and are not held accountable for being stupid or unprofessional. As one of my book sub-titles suggests, we need to access  all minds in all languages all the time.  These people are not even close — they are at 1% processed of 1% collected of 1% available, at best. And if you add to that 1% disseminated of the 1% processed, it is even more ugly.

Below is worth noting because the Open Source Marketplace is about much more than sources directly — you have tools and intermediaries.

One of the reasons the OSINT Cell that I designed is so important is because it provides for both a primary research specialist (outreach to human subject matter experts) and an online research specialist — not only does online cover special librarian databases such as DIALOG and LEXIS-NEXIS but it also knows the difference between the shit web, the cool web, and the dark web.

As best I can tell the US secret intelligence community and its contractors — for example, BAE which just got $400M from the US Army’s National Ground Intelligence Center (NGIC) are totally out of touch with intermediaries, and particularly intermediaries based on foreign countries who will never qualify for clearances and often hate Americans.  Properly done OSINT should be both a multinational endeavor and one that can be done through cut-outs.  Some of our best OSINT in the 1990’s not only used graduate students skilled in 29 languages CIA does not speak, but we turned classified intelligence requirements into “graduate thesis requirements.”

Now, you ask about the following document: 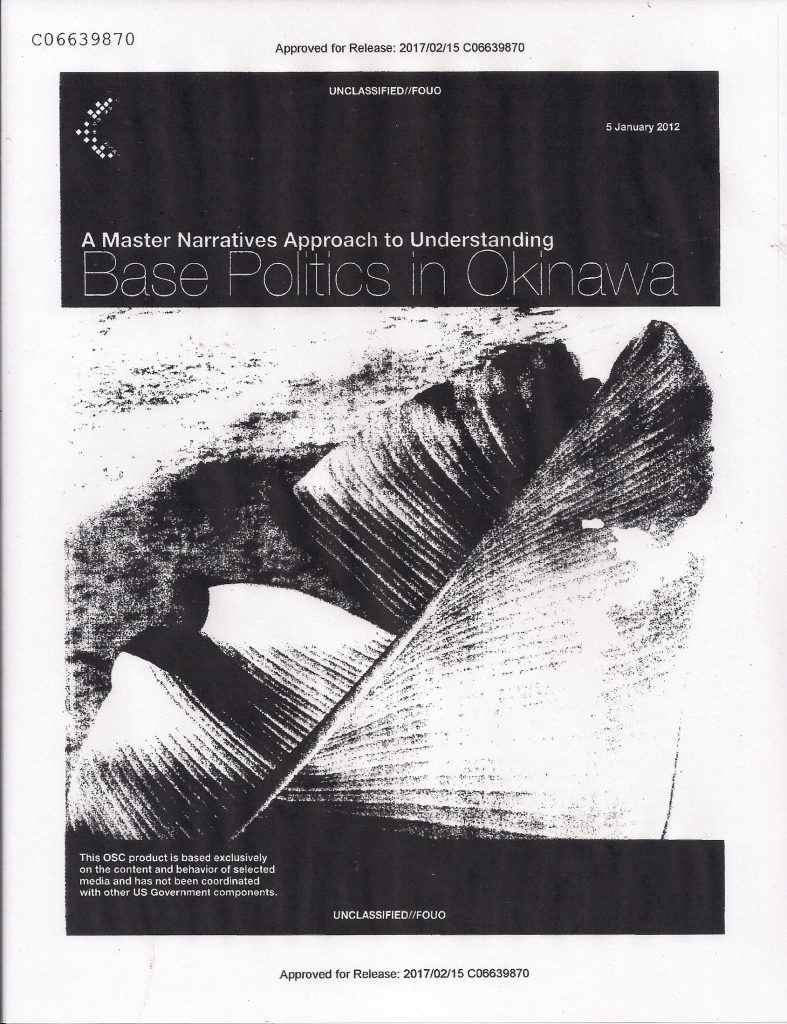 This is OSIF not OSINT.  It is a generic product.  I actually like it very much. While it lacks true cost economics and also lacks all the other countries that play in relation to Okinawa (including particularly China, the Philippines, and Viet-Nam, on balance this is a very find OSIF contribution.

A true OSINT report would answer specific questions from the commander such as:

What is the true cost of maintaining our bases on Okinawa rather than basing ourselves within the USA and demanding that the US Air Force be able to deliver a division in one week using a mix of military and conscripted aircraft combined with an acquisitiion program that ensures that all elements of our Marine Corps force are not only air transportable, but can roll off with all fuel, water, ammunition and crew and be instantly combat capable.

When I look at India and Pakistan and Bangladesh I see the mistakes  that Gandhi made, the errors that the Hindus have made, and the loss of what could have been an Indian empire equal to China.  Even today India has more Muslims than any other country in the world except Indonesia — and it is the only country in the world where more than one million people speak each of 22 languages.

From where I sit OSINT and an OSA for India — are exactly what India needs right now to  thing about all ten threats all twelve core policies, and all challengers; and to conceive of a strategy  that eliminates the Zionist parasite, makes peace with Pakistan and Bangldesh as well as China over the Kashmir watershed, and creates a massive new federation that is rooted in Open Source Everything Engineering (OSEE) such that the people at the bottom of the pyramid, as C. K. Prahalad wrote, become the focus on the Government of India — Hans Morgenthau wrote to the people being the foundation for national power.  India is coming to the end of an era where British backing and Sandhurst trained officers could keep the rabble down. It’s time to separate from the Commonwealth and focus on India becoming a global power that is rooted in OSEE capable of creating a prosperous India at peace, an India where 2,000 farmers a year are not committing suicide, where Open Source tractors replace children and beats of burden in plowing, and so on.

This may not have been your intent, but in reflecting on your question I am seeing an opportunity  to reflect on my own evolution from being the founder of the OSINT discipline to being the founder of OSEE — all the OSINT in the world will not help if the leadership refuses to consider OSEE as a solution for the greater good of all India.

I would be delighted if as part of your project you were to update the NATO OSINT Handbook such that it becomes an official teaching document and point of reference for the military in India as well as Rest of Government.

I would also be delighted if MoD India cared to host two conferences:

a) a national conference with representatives from the “eight tribes” depicted below, to discuss how to create a Smart Nation.

b) a military to military conference including Pakistan and Bangladesh and China and Viet-Nam and the Philipppines and others, to discuss the creation of a multinational decision-support centre such as I have long envisioned and illustrate below.

You are on a very important journey. Start thinking now about a briefing worthy of the Minister of Defence.  If I were to get an Open Source Agency mandate in the USA, I would certainly be creating an MDSC co-located with NATO ATC in Norfolk, but I would also want to subsidize several MDSC, for example in India, Turkey, Brunei, and Ecuador.