I am delighted you were able to look over my most important reference on OSINT:

Here is the graphic as it appeared in the book:

and here is a later variation that I prefer to use now.

The source for the ten high-level threats to humanity is below along with my summary review and a link to the Amazon page, and it is important to note that LtGen Dr. Brent Scowcroft, USAF (Ret) was the US member of the panel that identified these threats in PRIORITY ORDER.

It was this listing that inspired me to review transition books from past US presidential elections to see what policy domains might be identified that were vital for sustained intelligence (decision-support).  You can see the policy domains along the horizontal axis, from Agriculture to Water.

The relative value of OSINT for  each of the twelve core policies is at least 90%. We do not “do” secret intelligence and counterintelligence against our own population across these twelve policies — for example, the FBI ignores British and Zionist agents who are committing treason against the USA, and ignores elite pedophiles (while also collaborating with the Mossad and CIA and MI-5 and MI-6 in trafficking in children and doing DOMESTIC pedophilia entrapment and blackmail operations), and also ignores billion and trillion dollar white collar crime.  There is a HUGE role to be played by NSA against corruption and treason across all twelve policies. At the same time, there are some extraordinary  things that OSINT can do. My colleague Dr. Bert Little, for example, at a cost of $4M, did data analysis leading to the identification of close to $80M in crop insurance fraud. We don’t do all we can do with OSINT across these twelve core policy areas (including true cost analytics which we do not do at all on anything) and we are not applying ethical necessary secret sources and methods against the criminals and traitors that are active within the USA and abroad in relation to each of these twelve policy domains.

There are three points I would make here:

01 The Cabinet agencies cannot be relied on for OSINT (unclassified decision-support). Ellen Siedman, then on the National Economic Council in the USA, spoke to my OSINT lunch club and complained that on the one hand the secret intelligence world does not “do” comparative trade analysis (US versus others) and on the other hand the Cabinet agencies do not know how to “do” the proven process of intelligence (requirements definition, collection management, processing, analysis, communication of findings in a form digestable by a busy decision-maker).

02 The secret world obsesses on the two red dots above and ignores everything else at a time when the twelve policies and three threats are the heart of creating a prosperous world at peace.  This needs to change.

03 Both the secret intelligence world and the Cabinet are incapable of doing true cost economics inclusive of future and opportunity costs and they do not have a holistic analytic model — a major reason for KEEPING a central intelligence agency, after purging it of idiots and traitors, is to ACHIEVE the holistic analytics and true cost economocs synthesis required to support Grand Strategy, inter-agency acquisition, and multinational as well as Whole of Government operations.

Your second question is EXTREMELY IMPORTANT. The answer comes from the wisdom of Ben Harrison, the founder and leader of the US Special Operations Command (SOCOM) J-26, a man who in my view has not received the accolades he should have.

Ben’s brilliance was in recognizing that he should not answer any OSINT question or Essential Element of Information (EEI) unless it was first submitted, as are all EEI for classified collection, into COLISEUM, or the Community On-Line Intelligence System for End-Users and Managers, a Defense Intelligence Agency (DIA) automated production/requirements management system.

Within one year Ben and SOCOM J-26 had documented that for $5M with 22 people they answered 40% — FORTY PERCENT — of all SOF EEI world-wide.

As General Tony Zinni has documented, the secret world provides “at best” 4% of what a major commander needs to which I would add “and nothing for everyone else.”

Sadly, CIA was able to lie to subsequent commanders of SOCOM after General Peter Schoomaker, and the J-26 was virtually abolished, today it consists of five people going through the motions with no money to spend.

What this means is that an Open Source Agency (OSA)  could not only rapidly get back to answering 40% of all requirements from ALL Cabinet agencies across ALL threat and policy domains, but 56% of the EEI that have NOT been satisfied are up for resolution by a combination of an OSA doing 80% of them and the secret world, refocused on the fundamentals, doing the other 20%.

It is VITAL that OSINT be part of the all-source intelligence community from requirements to processing to analysis to dissemination, but it is also vital that OSINT have its own agency protected from sabotage by the likes of CIA or whatever the equivalent in India is.  This is the conclusion of BGen James Cox, CA, the NATO Deputy J-2 that sponsored my pioneering work for NATO form 2000-2004:

The below, also available as a Kindle and Print product at Amazon, is worthy of circulating among Ministry of Defence officials in India and everywhere else. 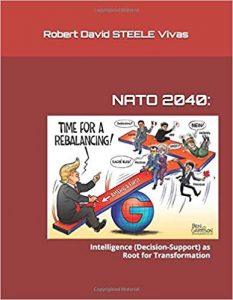