You have made frequent reference to computer aided tools for the analysis of science & technology.  Can you please explain the below diagram?

The above is a black and white version of the below, which was created by Diane Webb and Dennis McCormick under the supervision of Gordon Oehler, then Director of the Office of Scientific & Weapons Research in the Directorate of Intelligence at the Central Intelligence Agency. 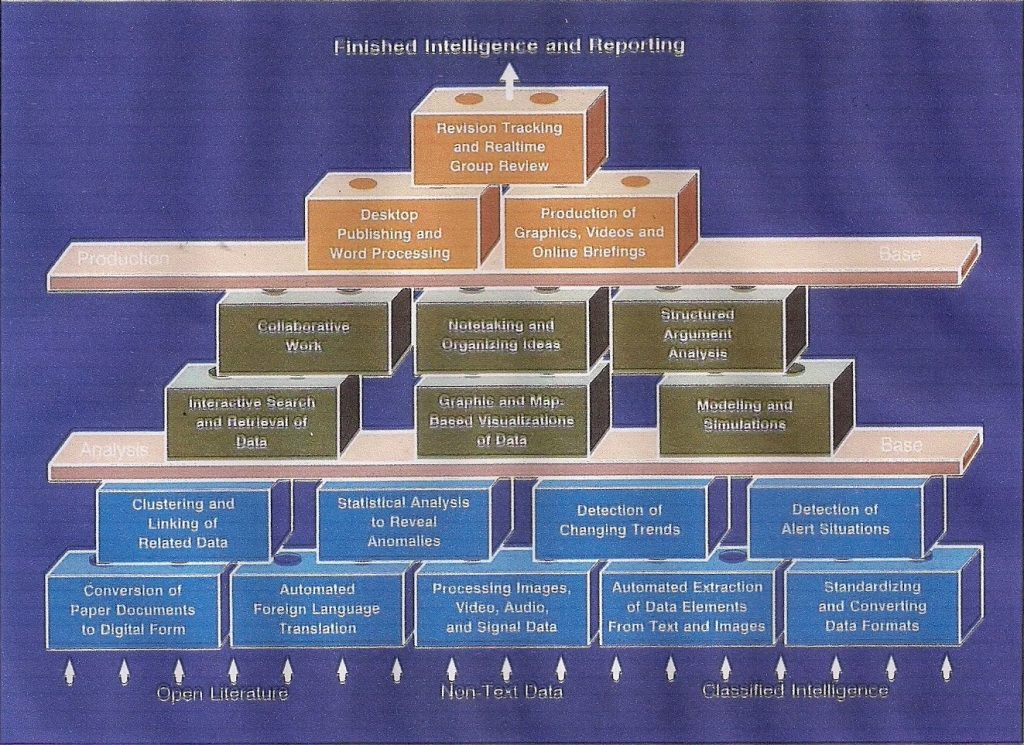 Although the document below was published in 1989, I had the draft in hand in 1986 when the CIA created the Artificial Intelligence Staff in the Office of Information Technology in the Directorate of Administration, around me.

Put bluntly, CIA has known what it needed in the way of sense-making tools for analysts since 1986, and it still does not have these tools today because a series of CIA leaders have been more focused on dirty tricks (drone assassination, rendition and torture, regime change, budget building) than they have on their actual mission, which is the production of decision-support for the President and other leaders of the US Government.

What Diane and Dennis and Gordon — I knew them all — were trying to do was move analysts away from hard copy paper files and far beyond the Microsoft Lotus Notes publication environment that was the CIA standard at the time — and a very low standard because video production and conferencing were in their infancy.

The middle section provides tools for organizing and evaluting intelligence once raw data has been converted into useful information.

The lower section deals with the very large challenges of ingesting and organizing unstructured data in many languages and mediums.  CIA still cannot do this today in the holistic manner envisioned by Diane, Dennis, and Gordon, and CIA still does not do true cost economics or strategic generalizations.

Below is a graphic from my most recent negative appraisal of the current state of information technology for intelligence:

In the above graphic red means totally dysfunctional while yellow means partially (and largely) dysfunctional. None of the eight slices — half mostly technical half mostly human — are anywhere near full functionality with integrity.

And here is my most recent formal published work on the urgency of creating tools for augmenting human intelligence.


I will add one more thought. We still do not have tools for security sharing information across tribal lines (the eight tribes — academic, civil society, commercial, government, law enforcement, media, military, non-profit). Nobody in a leadership positions actually cares about intelligence or decision-support — nor are they held accountable for being mediocrities.

We need tools for data discovery, sense-making at the individual and collective levels, sharing across all sorts of boundaries, and we also need tools for communicating complex concepts to decision-makers with the attention span of a gerbil that needs to pee.

Nobody, anywhere, is being serious about addressing these challenges in an integrated manner that would lead to peace and prosperity for all.