ROBERT STEELE: Everything I do has been thought out, if not by me then by God. I never imagined I would one day be making four fast movies enabled by “good enough” Zoom interviews. Although Alex folded on Sandy Hook he get huge continued respect from me for his role in the Great Awakening, and this piece may be part of his come-back.  Everything is connected. Election Fraud enabled a Satanic Congress which enables a Satanic Wall Street with $200 trillion in illicit wealth these past 15-20 years (half naked short selling, half money laundering from trafficking in children and drugs and other contraband, leavened with treason as Wall Street has colluded with foreign powers led by the UK and Israel, not just China and France and Germany and others) to sabotage for profit the US economy, government, and society. This is not over. We are, however, at the beginning of the end. May God Bless President Donald Trump and the First Lady Melania Trump, and all the patriots that have over the course of decades worked toward this day of reckoning — a Great Upset instead of a Great Reset.

DO please consider donating $1,000 for screen credit as a co-producer for one of the movies, executive co-producer for the Lucifer overview movie is reserved for those who donate $3,000 to support each of the foundation movies. 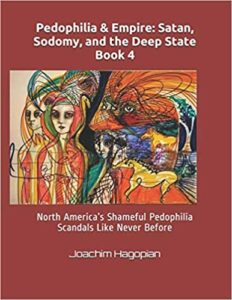 It was I who recognized that the combination of Comet Pizza and Jeffrey Epstein were opening a door for educating not just all Americans but the world as to the reality of Satanic pedophilia — trafficking, torturing, cannibalizing children — and it was I who engaged West Pointer Joachim Hagopian to write the five book series on Pedophilia & Empire: Satan, Sodomy, and the Deep State. It was I who raised the money and commissioned Sean Stone, son of Oliver Stone, as the director of the movie documentary Satanic Empire, with raw interviews to be completed by 1 March and the movie finished in April or May.

I could not have done this with God’s good grace and the interest of those who helped me raise $120K in one week with one post and two phone conversations. God is Great. GOD WANTS YOU TO PAY ATTENTION.

Satanic abuse of children is real. Learn more at https://pedoempire.org.