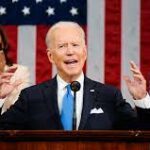 A group of more than 120 retired military officers have written to President Joe Biden to tell him his election was less than legitimate – while questioning his mental acuity.

The letter echoes former President Donald Trump’s claims of widespread election fraud – which have not been borne out in the courts – and comes on a day when Rep. Liz Cheney ripped Trump for his claim that the election was ‘stolen.’

‘Without fair and honest elections that accurately reflect the ‘will of the people’ our Constitutional Republic is lost,’ the letter from retired officers says.