Sam and Jack discuss the accusations that Donald Trump reportedly posted on his Twitter account he wanted to do away with the Constitution.

“A Massive Fraud of this type and magnitude allows for the termination of all rules, regulations, and articles, even those found in the Constitution” – Trump

However in rebuttal, Trump claims:

“The Fake News is actually trying to convince the American People that I said I wanted to ‘terminate’ the Constitution. This is simply more DISINFORMATION & LIES”  – Trump

On the upside, the Posse learned of R. C. Cutter Clinton, a newly elected Constitutional Sheriff from Panola, TX who is showing his support for the CSPOA and upholding and defending the constitution. Sam and Jack discuss his great talents and dedication to his Oath of office.

In other Intel, we learned that San Francisco voted YES to use killer robots on the street to combat crimes. Jack and Sam discuss the potential implications of using robots to patrol the streets.

Make sure you Login to your online Posse account and get the full Intel Report on this week's CSPOA webinar.

Shop at the CSPOA Store and get your Official Membership Card and more!

Support CSPOA and Stock Up with Numanna Foods 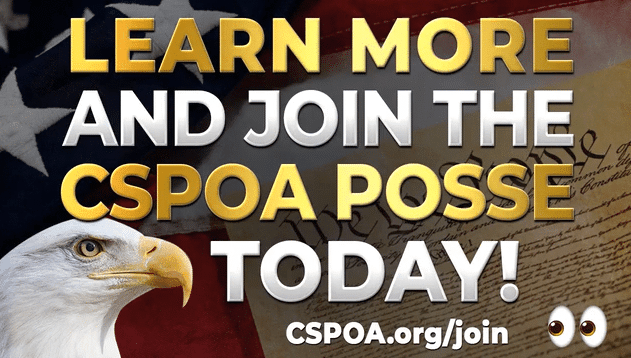 Robert David Steel Supported Sheriff Mack and the Constitutional Sheriffs & Peace Officers Assoc. Our Team will continue to support them as well in his memory.

Exclusive Posse Intel: Weston Martinez from VoterFBI.org reveals the current investigation taking place in Texas where it has been discovered there is voter fraud taking place and currently under investigation where Cocaine and Cash are being given out in exchange for fraudulent votes in one specific county. Find out the truth and help take our country back… county by county, state by state…

END_OF_DOCUMENT_TOKEN_TO_BE_REPLACED

The Question Has Been Raised. Does Your Sheriff Think He’s More Powerful Than the President?

END_OF_DOCUMENT_TOKEN_TO_BE_REPLACED

This Week on CSPOA's Exclusive Posse Member Webinar 9-27-22: Sheriff Mack talks to Jack Mullen about various topics including ways to take America back – county by county and state by state.

Virginia Sheriff Scott Jenkins was asked, “Do you see Sheriffs as the last line of defense if the Federal government did look for ways to massively confiscate firearms?”

END_OF_DOCUMENT_TOKEN_TO_BE_REPLACED

Sam Bushman and Jack Mullen join together on this week's Posse Webinar to discuss more current events in America pertaining to We the People and our Liberties.

END_OF_DOCUMENT_TOKEN_TO_BE_REPLACED

“Enjoying the Fruits of My Labor”