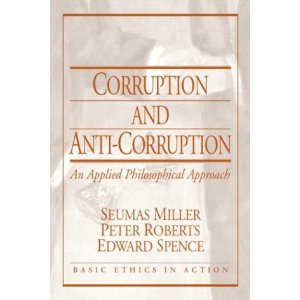 Beyond Six Stars: Superb Foundation Work–Should Be Translated, May 5, 2010

Corruption is the pervasive, pernicious, pathological, preemptory, and predatory commonality within the ten high level threats to humanity as identified by the United Nations High-Level Threat Panel and published in 2004 in A More Secure World: Our Shared Responsibility–Report of the Secretary-General’s High-level Panel on Threats, Challenges and Change; and is also responsible for between 20% and 40% of the lost resources of all kinds across the twelve core policy areas as inspired by the UN but identified by the Earth Intelligence Network (501c3) dedicated to creating public intelligence in the public interest-and especially “true cost” intelligence.  (E.g. Exxon did not make $40 billion in profit in its recent high year–that was stolen from current and future generations because Exxon externalized $12 in costs for every gallon of gas that it sells for $4). See INTELLIGENCE for EARTH: Clarity, Diversity, Integrity, & Sustainability and also, for the underlying hope factor, Collective Intelligence: Creating a Prosperous World at Peace.

This book is beyond six stars–it is righteously constructive, useful, concise, focused, relevant, and despite some heavy trails in the middle, a joy to read for anyone who believes that there is plenty of wealth for all, we just need to stop corruption in all its forms. Lawrence Lessig, I have been told, is committing the rest of his life to eradicating corruption–his latest book Remix: Making Art and Commerce Thrive in the Hybrid Economy is particularly recommended because I am discovering, as he has, that HYBRID is going to be the core concept for the 21st Century. To take a very specific example, the International Commission Against Impunity in Guatemala (CICIG) has helped the Government of Guatemala put more people in jail (over 130) in relation to corruption and illegal armed groups, in four years, than the rest of the UN and I suspect INTERPOL and EUROPOL as well. It is a HYBRID organization with uniquely effective capabilities, a “son” of the United Nations but not part of “the” United Nations. I personally believe that it represents the future of multi-layered multi-stakeholder governance, still respecting the national government as the core actor, but bringing to bear transnational resources, autonomous investigative and analytic capabilities, and ultimately engaging all of the stakeholders including the oligarchs and the labor unions, so as to address the totality of a nation’s problems starting with poverty–what the UN is now calling “Deliver As One” integrated holistic mission analysis.

Here is my summary of this extraordinary book and I repeat, this needs to be translated into Spanish, French, Russian, Chinese, Arabic, and ideally Malay, Turkish, and several other languages as well. It is a completely different book from Overcoming Corruption [ISBN 0956478808 and strangely not coming up in the Link Feature.] I venture to suggest these two books as a starting point for a new wave of regionalization and transnationalization of anti-corruption campaigns.