Aug. 23, 2009 | On Thursday, the so-called Gang of Six – three Republicans and three Democrats on the Senate Finance Committee – met by conference call and, according to Max Baucus, D-Mont., the committee’s chair, reaffirmed their commitment “toward a bipartisan healthcare reform bill” (read: less coverage and no public insurance option). The Washington Post reports that the senators shared tales from their home states, where some have been besieged by protesters angry about a potential government takeover of the nation’s healthcare system.

So, I repeat: Why has it come down to these six? Who anointed them? Apparently, the White House.

The White House is weaseling.  They have not done their homework, they know they don’t know what they are doing, and in passing, they cannot seem to “multi-task” as the candidate so off-handedly claimed he could do in the run up to Election Day (and he still has not accounted for $300 million of the $750 million known to have been spent).

1.  Completely apart from the idiocy of bailing out Wall Street, which has moved all that money overseas to double its money when the dollar collapses, the White House appears unaware–or has been paid to be unaware–that drugs we buy today in the USA for $600 can be bought in Canada for $60 and in Thailand for $6.  All 75 of the top drugs are so available, at 1% of the cost now being paid, the trick is knowing which patent holders and which generic wholesalers to approach around the world.

2.  The graphic below is a “sane” approach to health policy, which cannot be made without due regard to all ten high-level threats to humanity (infectious disease being #2) and the other 11 core policies (among which Water, now “Blue Death” by one account, is very important).  The White House is not stupid, far from it.  The White House is failing to do its duty and therefore the White House is in breach of the public trust, as are all Members who fail to call a spade as a spade, and renounce the two-party tyranny that is using the White House as theater while Goldman Sachs finishes the looting of FUTURE revenues (never been done before–amazing). 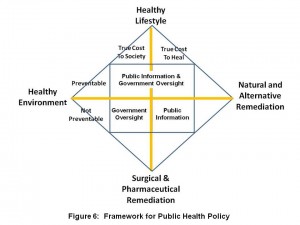 Follow Health Policy 101 back to the book, ELECTION 2008: Lipstick on the Pig, whose first chapter on The Substance of Governance” will never be read by this White House because they are not really interested in governing Of, By, and For We the People.

This is simple.  Any White House that fails to think and act responsible is impeachable.  All that is being done right now on health policy is a charade, a despicable, unworthy combination of individuals lacking both knowledge and integrity, with processes that are being deliberately obscured.  Jim Rough, one of the pioneers of Collective Intelligence, has offered up a plan for a national dialog on health that would adhere to the principles of Intelligence for Earth: Clarity, Diversity, Integrity, & Sustainability.  Follow the Frog to his proposal.

The public is beginning to understand that “bi-partisan” is code for the two-party tyranny acting to screw the American public in favor of special interests.

Visit all of the Righteous Sites we have recognized here, and please, contact us to add more.  There are now more Independent eligible voters than both registered Democrats and Republicans combined.  Steps are being taken that could confront the White House with the Electoral Reform Act of 2009, and the public is now reach a point where once that is in the public eye, anyone not voting for it will be toast in 2010.

Information, not guns, is how we get our Republic back on track.