Phi Beta Iota: This keeps getting worse.  We wonder if CIA contractors get stars on the wall–4 employees including the one who was over-ruled by Berger, Tenet, and Brennen in taking Bin Laden out unilaterally; 3 guards, and a Jordanian intelligence officer who was probably “handling” the asset that did not get searched coming into a “safe” area.  So now we have analysts as chiefs of base (or visiting) on the front line; Jordanian “case officers” providing the language, tradecraft, and other services, and “flipped” assets not validated who get to waltz inside our lines without being searched.   Still unclear is whether the Atlanta detective until recently a UN security officer was an employee or a contractor.

The only thing worse than what CIA is doing in AF and IQ is what the military is evidently unable to do: combat intelligence and counter-intelligence.

See also the Sanity Check comments associated with this posting.

UPDATE:  CIA invited suicide bomber on base as a potential informant

Phi Beta Iota:  The informant was not searched prior to being brought into the “safe” area.  This is what happens when you have inexperienced people too focused on convenient debriefings and not focused enough on counterintelligence.  The Cubans and the Soviets have been running rings around CIA for decades with walk-ins, and CIA now has a whole new crop of folks with no idea how to operate in the field.  We are reminded of the two CIA case officers that went nuts in Somalia.  Somebody needs to  tell Panetta he's in charge of Clowns in Action.  Similarly, the first CIA casualty in Afghanistan was killed because CIA got into the prison business and had no clue on the fundamentals, such as searching prisoners before putting them into group confinement.  This is a tragedy that could have been avoided.

Eight CIA agents have been killed in a suicide bomb attack in south-eastern Afghanistan, US reports say.

A bomber was wearing an explosive vest managed to enter Forward Operating Base Chapman in Khost Province, on the border with Pakistan.

Initially, the dead Americans in Khost were described simply as civilians, but they were later reported to be CIA agents.

Any further details are being withheld, pending notification of the families of the deceased.

NIGHTWATCH COMMENT: Khost, which forms part of the eastern border with Pakistan, has been the focus of nearly daily IED attacks and firefights since mid-December. It is a core province of the Taliban and yet the Taliban continue to fight there because the government and the coalition forces will not concede the province to the Taliban.  After so many bombings and clashes in Khost this month, it is hard to imagine a security lapse of this magnitude without inside help.

Phi Beta Iota: CIA personnel who are US citizens are officers, not agents.  We are reminded of how no one understood the import of a lone disgrunted former asset killing CIA people at the front gate of the their McLean Headquarters.  Long ago we put forth the idea that we were in a six-front war of our own making, and we fear that the US is not only over-extended but totally clueless as to the vulnerability of its many lines of communicaiton and supply.  Furthermore, idiocy on the part of “deciders” magnifies the effect of minor attacks beyond belief.  There is absolutely no question that our armed forces can slug it out for several more years–what is in question is the integrity of the intelligence, policy, acquisition, budget, and future operational capacity across inter-agency and multinational engagement lines. 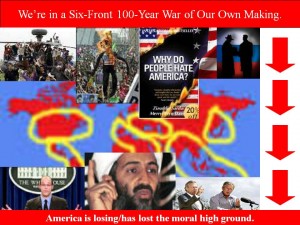 A later version is below as well. 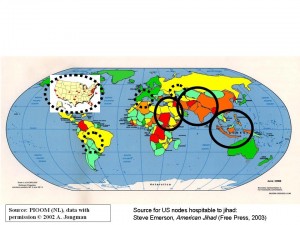