In the artistry of war, the insertion of a Jordanian double-agent who detonated his explosive vest inside this super-sensitive CIA bunker was flawless. But, in their payback, the enraged Americans confirmed the breadth of a new horizon in modern warfare – launching 15 clinical drone attacks in which more than 100 people died along the border, as Washington’s electronic eyes and guns sought out Mehsud and his Taliban and al-Qaeda allies.

War does not get more radical than this – technically, politically and, perhaps, ethically.

Consider: for the first time ever, a civilian intelligence agency is manipulating robots from halfway around the world in a program of extrajudicial executions in a country with which Washington is not at war.   . . .


The US Air Force now has more drone operators in training than fighter and bomber pilots. 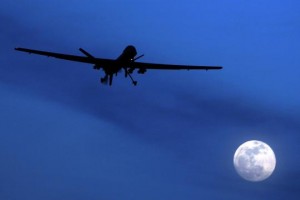 The drone has become the weapon of choice against Al Qaeda and Taliban leaders. CIA director Leon Panetta called it “the only game in town,’’ and the Pentagon recently announced it was doubling drone production. The US Air Force will soon have more drones than fighter aircraft.   . . .


As Jane Mayer described it in the New Yorker, he’s sitting at a screen. He can zoom in, see whom he wants to kill, and push a button. Sometimes he sees people running out of targeted houses for cover. This is so common, according to Mayer, that the running people are called “squirters’’ at Langley. 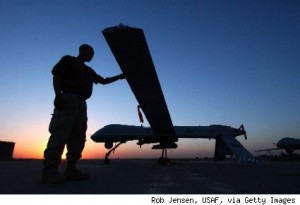 Obama’s Drone War: Does The Killing Pay Off? (PoliticsDaily.com)

But those stepping into vacant leadership positions, he added, “are more deadly. They do not have strong ideological links. They are dangerous. These are not guys you can talk to.”   . . .


These attacks, the resurgence of al-Qaeda, and the flare-up of its operations in Somalia, Yemen and elsewhere, suggest that the campaign to stop terrorists by killing off terrorist leaders has been less than successful.

“Killing leaders supports an illusion of progress, but not the reality,” said John McCreary, former strategic analyst for the Joint Chiefs of Staff.