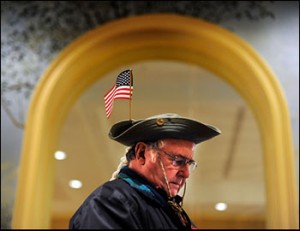 Phi Beta Iota: 1,100 reportsed to be present for the keynote by Sarah Palin.

Reporting from Nashville – Ask Gail Hathaway, a warm 61-year-old retired nurse from Vonore, Tenn., what she wants out of the “tea party” movement, and she returns the quizzical look of someone worried she’s been asked a trick question.

The Other Tea Party Convention: Activists Meet In DC (The Atlantic Online)

The activists and organizers at the DC meeting did not attempt to draft any kind of doctrine, though one activist in attendance, Ryan Hecker, is working on a document that will state Tea Party principles. He plans to take thousands of suggestions, posed by Tea Partiers themselves, and let activists vote on them online–open-sourcing a loose sort of Tea Party platform, in effect.

“The goal is to create a grassroots, bottom-up contract with America,” Hecker told the reporters and activists in attendance.

”We are people who understand something wrong is going on in this country, and we want to change it,” says Dan Garner, a married 40-year-old sales representative from nearby Carthage who is new to politics. Like so many others, he’s had enough. ”The core thing is a loss of individual liberty.”

Retirees, stay-at-home moms, small-business owners, corporate executives and everyone in between — many political neophytes who aren’t hardcore ideologues — are using the latest technology to come together and vent their frustrations about their country and plot to install a new group in charge of the government.

As keynote speaker at the convention, Palin has undoubtedly given the tea party movement a new level of legitimacy and stature. Moreover, her decision to go ahead with the speech even as others pulled out suggested to many that she may be positioning herself as the de facto leader of the tea party movement.

Bolstering that view is Palin’s decision to turn down an invitation to speak at the Conservative Political Action Conference later this month. The conference is widely considered a must-attend event for conservatives and Republicans lining up a run for office.