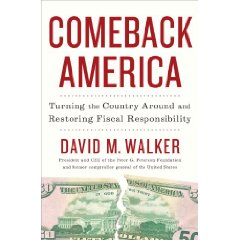 I was watching David Walker as he served nine of his fifteen years at Comptroller General, with light-weight whimpers to Congress until he finally got Peter Peterson to bail him out of government and give him a chunk of cash for making movies and writing a book and creating a web site that very few serious under 40 pioneers pay attention to.

I was thrilled to see him tell Congress in 2007 that the US was bankrupt–both Senator McCain and Senator Obama could have cared less–and so he walked quietly back to his holding cell at the General Accountability Office (GAO).  His “loyalty” to impeachable masters is just as troubling to me as the loyalty of our military leaders during the neo-con rampage.

This book loses one star for the publishers arrogance and ineptitude in failing to use all of the tools Amazon provides, so that readers like myself who read a great deal and do not buy books on whim, can actually look at the table of contents. If you want a sense what the author has to say, see the Wikipedia page on the US Federal Budget where the author’s fingerprints are elegantly visible.

If and when the publisher acts more responsibly and provides Look Inside the Book information as well standard entries via Amazon Advantage (about the book, about the author, editorial reviews), I will buy the book, read it, and review it.

The book loses a second star for being wildly praised by all the unethical losers that got us into this mess in the first place by sacrificing their ethics and selling the two party system out to Wall Street. Bill Bradley in particular is a major disappointment, he slunk off to Allen and Company where George “Slam Dunk” Tenet is also in hiding, and they have profited handsomely for betraying the public trust for over a decade. Edumund Burke said “The only thing necessary for the triumph of evil is for good men to do nothing.” Even better is the following from Chief Justice Louis Brandeis:

In a 1905 address to law students and others at Harvard, he explained his philosophy:

“The great achievement of the English-speaking people is the attainment of liberty through law. It is natural, therefore, that those who have been trained in the law should have borne an important part in that struggle for liberty and in the government which resulted . . . .

Instead of holding a position of independence, between the wealthy and the people, prepared to curb the excesses of either, able lawyers have, to a large extent, allowed themselves to become adjuncts of great corporations and have neglected the obligation to use their powers for the protection of the people. We hear much of the ‘corporation lawyer,’ and far too little of the ‘people’s lawyer.’ The great opportunity of the American Bar is and will be to stand again as it did in the past, ready to protect also the interests of the people.”

From where I sit, David Walker is a Johnny come lately to the concept of integrity in public service, and virtually every person raving about this book is retrospectively impeachable for betraying the public trust over and over again for decades.

I am not removing a third star, that would be too unkind to a well-intentioned but terribly useless work, for Walker’s deliberate obfuscation of what the U.S. military actually costs the country, roughly three times more than he shows anywhere he has written. For a more accurate portrayal, see Winston Wheeler and the Straus Military Reform Project at the Council of Defense Information.

If the two-party system that Peter Peterson himself famously denounced in Running on Empty: How the Democratic and Republican Parties Are Bankrupting Our Future and What Americans Can Do About It makes the last two president’s “lipstick on the pig” as I put it in my book available free online as well as here at Amazon, Election 2008: Lipstick on the Pig (Substance of Governance; Legitimate Grievances; Candidates on the Issues; Balanced Budget 101; Call to Arms: Fund We Not Them; Annotated Bibliography), then this book and this author are lip gloss.

The Republic is suffering from multiple chest wounds. Lip gloss at this late date just will not do.

Rather than list better or alternative books here, since Amazon limits me to ten, I will just point to Phi Beta Iota, the Public Intelligence Blog, where all of my Amazon reviews are sorted in ways that Amazon refuses to make possible here. Among the categories (out of 98 categories coverging over 1,500 books) relevant to evaluating this book and this author in context are these:

It is my personal view that people like David Walker should not be allowed to spend their entire professional life helping betray the public trust, and then at the last minute come up with a book and a “vision” that was original to the Founding Fathers and is now the moral equivalent of a hardened criminal “finding Jesus” as a ploy to avoid going to jail. Justice will be done–I believe in Truth and Reconciliation, but I also believe that the truth at any cost lowers all the others costs and must precede reconciliation. Walker and Bradley need to look deeply into their souls and decide just how much truth they can handle about their crimes of omission against the public. Of course this also applies the Morgans, Rockefellers, Bushes, and Clintons, as well as Al Gore and the other camp followers. Al Gore especially–he took the fall in 2000 on a deal delivered from New York by Warren Christopher and has been well rewarded, no least because of his participation in the global fraud managed by Maruice Strong, carbon credits, the green equivalent of sub-prime mortgages.

All of these people make me sick to my stomach. Instead of using their power and wealth to rapidly get us back on track, they are still in the delusional mode of thinking “I’ve got mine, so what if the rest suffer.” News flash for New York: public health was created by the rich when they figured out the Earth takes no prisoners and does not stop in the face of wealth. The rich have created a planetary cesspool that will kill them just as fast as the rest of us–every single day that they allow to pass without adopting a strategic analytic model, creating a World Brain, and moving to harmonize policies in order to achieve Reflections on Evolutionary Activism: Essays, poems and prayers from an emerging field of sacred social change and Nonzero: The Logic of Human Destiny brings them one day closer to reincarnation as the pigs they really are.

Note: I’ve put more time into this “non-review” than usual because of both my familiarity with the contradiction of past behavior over proposed behavior, and because I believe these views are representative of the average American that has been greviously injured and betrayed. I welcome any invitation to speak publicly in New York, in any format (debate, forum, whatever). It is time the New York elite started thinking seriously about real wealth in the real world.