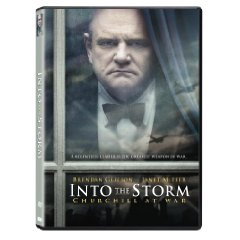 Very Satisfying but Not Inspiring

I watched this on background while finishing up my new book and on balance it is certainly most satisfying and I would recommend it to anyone along with Ike – Countdown to D-Day.

As an admirer of the half of Churchill that was both articulate and a statesman (as opposed to the duplitous half that betrayed every promise made to the Arabs, see A Peace to End All Peace: The Fall of the Ottoman Empire and the Creation of the Modern Middle East and Web of Deceit: The History of Western Complicity in Iraq, from Churchill to Kennedy to George W. Bush), I found the movie adequate but not as inspiring as it could have been.

His great speeches on tape are delivered better on tape than in the movie (I do not recommend the books of his speeches, the publishers failed to put them in the original poetic form for proper appreciation and reading).

The movie misses a huge opportunity, when Churchill is so very rude to his man-servant, they substituted the wife asking him to stop, boring, to the actual exchange in which the man-servant stands up to Churchill, saying he is very rude, and Churchill’s answering, “yes, but I am a great man,” to which the man servant has an accepting acknowledgement.

The movie also fails to capture the actual nature of the bunker war rooms, something I visit each time I visit London, and they went cheap on Dunkirk, which really was one of England’s finest hours. Had they gone to the trouble of filming Dunkirk, admittedly a great expense, this film would have been a five, I get goose-bumps just thinking about the flotilla of small craft managing to bring back the entire British Army.

For serious documentaries about lessons of war and the underlying malfeasance of war, see:
The Fog of War – Eleven Lessons from the life of Robert S. McNamara
Why We Fight
The Good Soldier DVD – Maysles Brothers Award Winning Documentary by Lexy Lovell + Michael Uys