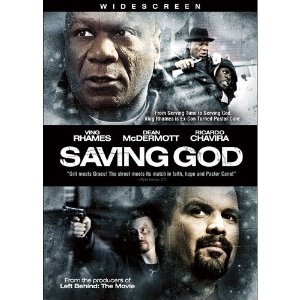 From Wikipedia in English: Irving Rameses “Ving” Rhames (born May 12, 1959) is an American actor best known for his work in Pulp Fiction, Don King: Only in America, and the Mission: Impossible film series.

I put that up there because for me he will always be one of the main actors in Entrapment (Special Edition) where he very strangely has not received the credit he deserves as a supporting actor.

I am glad that all the Christians like this movie, but for me is is not a Christian movie per se, but rather a movie about raw life, the contradictions and challenges, and more often than most people realize, the unexpected openings for salvation and a new direction. The end is gripping, it can inspire tears.

Ving Rhames is the lead actor here (as he was in the sequel to Kojak as a series) and I would very much like to see him featured in other movies. Solid as a rock and that refers to his mind and his presence, not his body.

Absolutely recommended for viewing by anyone, not just families, and especially anyone who thinks they are “stuck.” Taking a line from Human Target: The Complete First Season, “You’re not as stuck as you think you are.” BRAVO.

As a gesture of respect, and with a tip of the hat to Wikipedia where his entry is one of the better ones on substance, here are the three Mission Impossible movies he appeared in, the only person besides Tom Cruise to have this honor:

Also see him with John Travolta in Pulp Fiction.