Some D-Day reflections from 2009 that still merit reflection today.

“The Rule of LGOPs” Little Groups of Paratroops

On this the 67th anniversary of the World War II D-Day invasion it is only fitting to remind ourselves that rarely do things go as planned in battle. The 18th century military strategist Carl Von Clausewitz called it the “fog of war.” It must have been pretty foggy on the night of June 5th and morning of June 6th 1944 off the coast of Normandy. In the pre-dawn hours Airborne troopers were dropped all over the field of battle, few hitting the “drop zone” as planned… 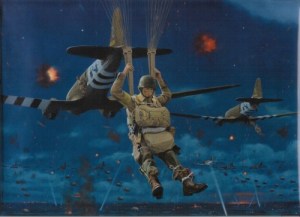 Rule of LGOPs
“After the demise of the best Airborne plan, a most terrifying effect occurs on the battlefield.  This effect is known as the Rule of LGOPs.  This is, in its purest form, small groups of 19-year old American Paratroopers. They are well-trained, armed-to-the-teeth and lack serious adult supervision. They collectively remember the Commander’s intent as “March to the sound of the guns and kill anyone who is not dressed like you…” …or something like that. Happily they go about the day’s work…

The Rule of LGOPs is instructive:
– They shared a common vision
– The vision was simple, easy to understand, and unambiguous
– They were trained to improvise and take the initiative
– They need to be told what to do; not how to do it

Phi Beta Iota: John focuses on issues of complexity and resilience, and both his blog and his book reviews at Amazon will begin to appear here as they are posted.