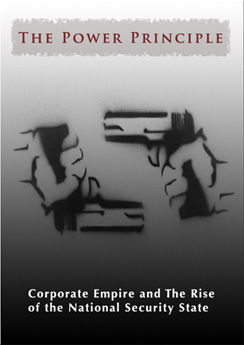 “A gripping, deeply informative account of the plunder, hypocrisy, and mass violence of plutocracy and empire; insightful, historically grounded and highly relevant to the events of today.” – Michael Parenti, Historian, Author The Face of Imperialism

This three part documentary is downloadable for free online.

After the end of World War II, the United States began a campaign to position itself strategically around the globe so that in the event of another war it would be more powerful than it’s enemies. The terrible lesson of World War II was that never again could an amoral and dictatorial power be allowed to dominate the world.

The enemies of America in World War II were national powers bent on spreading their empires through violence, installing puppet regimes and seizing the resources of other countries for their own use, so that they could strengthen their ability to further their own strategic interests and wage war against their enemies. The United States could not allow this to happen again.

But in order to preempt any nation from being able to once again commit such enormous evils, America was forced to spread it’s empire through violence, installing puppet regimes and seizing the resources of other countries for our own use, so that we could strengthen our ability to further our own strategic interests and wage war against our enemies, so that this could never happen again.

This three part series is a summary of the history of the implementation of this American strategy.

OUTLINE OF THE SERIES

An Introduction to Empire —- Iran, Oil and Geopolitics, Guatemala, the  Merger of State and Corporate Power, The Congo, Neocolonialism, Grenada, “The Mafia Doctrine”, Chile, “Libertarianism with a small l,” Globalization: Consequences

The Soviet Menace? Case Studies: El Salvador, Nicaragua, Propaganda: Self-Deception and blowback, The “International Communist Conspiracy,” Declassified Documents, NSVC 68, The Pentagon as Keynesian Mechanism, The Military Industrial Complex, The War Against the Third World, Shifting rationales, What is imperialism? Case Study: Haiti, “War is a racket”  Fear-Based Conditioning, The War of the Worlds, The Triumph of the Will, World-View Warfare, The Russians Are Coming, Television: The Perfect Propaganda Medium, Soviet vs American Propaganda, Hollywood and the Pentagon, Psy-warriors and the Media, Operation Mockingbird, The Pentagon Pundits, Project Revere, The Bomber Gap, “Scare the Hell Out of Them”

Mutually Assured Destruction, MAD Men, Curtis Lemay and the Super Hawks, MAD Men – Hermann Kahn and the Rand Corporation, Overflights as Provocation, Cuba: the Danger of the Good Example,” Terrorism against Cuba, “Unconventional Warfare,” the Cuban Missile Crisis and the “Man Who Saved the World” Why Did the Soviet Union collapse? Gorbachev: “A More Violent and Less stable World”, The Pentagon’s New Map, Did Ronal Reagan End the Cold War? The Brink of Apocalypse: Able Archer, The Betrayal of Russia, The Expansion of Nato, Yugoslavia and Libya, The Yeltsin Coup, Living Standards in the Former Soviet Union, A Third Way?

Postscript: The Power Principle, A gripping. deeply informative account of the plunder, hypocrisy, and mass violence of plutocracy and empire; insightful, historically grounded, and highly relevant to the events of today.