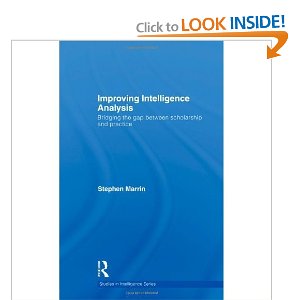 The book will be of great interest to students of intelligence studies, strategic studies, US national security, US foreign policy, security studies and political science in general,as well as professional intelligence analysts and managers.

Comment and Nine Other Linked Books Below the Line

Phi Beta Iota:  Any analytic endeavor that lacks a whole systems model, an appreciation for true cost economics, and direct persistent access to humans across all eight tribes of intelligence (academic, civil society, government, law enforcement, media, military, non-government/non-profit) is retarded.  The current generation of analysts is burdened with terrible management, terrible sources, and terrible tools, small pockets in isolation not-with-standing.  Until an analyst can credibly say to a manager “pay attention to me or your lose everything,” analysts will continue to be off in a corner and of little import.

2010 Timothy Walton Challenges in Intelligence Analysis: Lessons from 1300 BCE to the Present Cambridge