The Force: How much military is enough?

Sixty-two legislators sit on the House Armed Services Committee, the largest committee in Congress. Since January, 2011, when Republicans took control of the House, the committee has been chaired by Howard P. McKeon, who goes by Buck. He has never served in the military, but this month he begins his third decade representing California’s Twenty-fifth Congressional District, the home of a naval weapons station, an Army fort, an Air Force base, and, for the Marines, a place to train for mountain warfare. McKeon believes that it’s his job to protect the Pentagon from budget cuts.

But by far the most adamant statement came from Dempsey. “I didn’t become the chairman of the Joint Chiefs to oversee the decline of the Armed Forces of the United States, and an end state that would have this nation and its military not be a global power,” he said. “That is not who we are as a nation.”

Either the United States rules the world or Americans are no longer Americans? Happily, that’s not the choice the 113th Congress faces. The decision at hand concerns limits, not some kind of national, existential apocalypse. Force requires bounds. Between militarism and pacifism lie diplomacy, accountability, and restraint. Dempsey’s won’t be the last word. 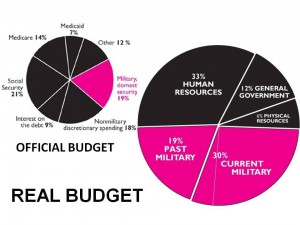 Phi Beta Iota:  The article above, available free at The New Yorker, in full without registration, is well worth reading and blends ignorant Congressional belligerence with documents protests and historical quotes from Eisenhower as well as Kerry.  Here is the bottom line: the Members, including the Chairman of the House Armed Services Committee (HASC), cannot handle nuances so they treat all defense dollars as equal.  In the absence of consequences for betraying the public trust, they focus exclusively on the pork (5% is the standard kick-back).  Here are some of the big pieces of the defense budget, following by some references on how we can and we must cut 30% of the budget, close down our overseas bases and contingency operations, AND build a 450-ship Navy, long-haul Air Force, and air-liftable Army.  The military budget is HALF our current budget.  Here are some of the big pieces (this is off the cuff — OMB people can make it better):


01)  Personnel costs including retirees, disability, and health care for all veterans across over ten wars and many interventions.  This is vastly larger than the White House, Congress, and the Pentagon are willing to admit.  Combined with an unemployment rate of 22.4% (not the insipid 8% the Administration claims), this is a stake in the heart of the American public.

02)  Overseas bases and contingency operations costs.  The cost of over 750 permanent military bases, 44 of them around Iran, is both heavy, and unwarranted.  We cannot close these outlying elements of a dysfunctional Pentagon just yet, but we should be executing a complete make-over that builds the 450-ship Navy, the long-haul Air Force, and the air-liftable Army, and as that is achieved, one air-sea-land triad at a time, we should be closing the bases.  Of course we should exit Afghanistan and Iraq immediately, while also closing down CIA’s drone assassination, and closing down most CIA official cover facilities, they are a joke.  Special Operations needs to be cut back sharply from $10B a year toward $4B a year (twice its old budget of $2B a year).  This has been “hidden” in Supplemental appropriations and is the fastest source of radical savings in the near term.

03)  Procurements, RDT&E, Construction.  This is 33.4% of the Pentagon budget and includes totally insane obligations such as a $100 million dollar mink-lined Torah-inscribed underground facility in Tel Aviv funded by the US taxpayer and built under US Army Corps of Engineering contract authority.  Combine that with the multi-billion dollar facilities thrown all over Iraq and Afghanistan and Pakistan, the complete make-over of various US military based across the USA (precisely the same thing was done with Viet-Nam funds) and you have a MASSIVE over-building program that needs to be cut back.  Most RDT&E requires adult inspection and reconnection to reality.  Most current procurements are based on very bad design, zero inter-operability, zero communications and intelligence support planning, and generally too heavy, too complicated, and too irrelevant to future needs to warrant continuation.  The Air Force stealth fighter that poisons its pilots, and the Army vehicle that has to be broken down into pieces to air lift, are two classic examples of persistent  idiocy and ineptitude across the Office of the Secretary of Defense.

04)  Foreign Military Sales.  These have doubled since 2008, and now exceed $65 billion a year but with black budgets and side deals probably come closer to $100 billion a year.  Treaty obligations not-with-standing, this is the second immediate source of savings.

05)  Operations & Maintenance Excluding Pay.  This is 27% of the total Pentagon budget (not part of overseas contingency supplementals) and includes training.  Some deep thinking is needed on what training is essential and what training can be cut back.  Right now we do not need division-level exercises, we do not need around the world Air Force tourism, and we do not need to have carrier battle groups in sustained combat deployments.  There are some extremely capable people in the Pentagon, and in the GAO, CRS, and OMB, they need to be brought together and given a chance to devise solutions that are based on intelligence with integrity instead of the present corrupt “guard budget share at all cost” mentality that undermines the presidency and the public.

06)  Non-Military Obligations & Opportunities.  Peace is cheaper than war, but we are not investing in peace.  At least $100 billion a year needs to be transferred from Program 50 to Program 150, but it needs to be done in the context of an Open Source Agency, a United Nations Open-Source Decision-Support Information Network (UNODIN), and a new global to local inventory of needs that GUTS any international specialized agency or charity unable to deliver 70% or more of its donations in the form of deliverables.  This can only be done with a global grid of open-source decision-support.

2012 Robert Steele: Reflections on the US Military — Redirection Essential — and a Prerequisite to Creating a 450-Ship Navy, a Long-Haul Air Force, and an Air-Liftable Army

2012 Robert Steele: Addressing the Seven Sins of Foreign Policy — Why Defense, Not State, Is the Linch Pin for Global Engagement