It is a Sorcha Faal [known fabriactor David Booth] story but some of the news items on which it is based indicate a very tense situation in which unwanted escalation could result from misinterpretation. This kind of stories can contribute to misinterpretation which can be very dangerous. 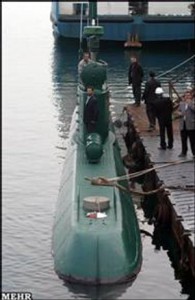 A grim Ministry of Defense (MOD) “URGENT ACTION” bulletin to all Strategic Missile Forces (SMF) is warning these nuclear units to prepare for “Dead Hand” operations over growing fears that at least 5 atomic-bomb equipped North Korean submarines have “successfully evaded” US Naval Forces and are preparing to strike targets in South Korea, Japan and North America.

According to this MOD bulletin, North Korea conducted its third underground nuclear test in seven years on 12 February after which Russian defense analysts noted a series of “highly suspicious” transfers of  “unknown materials” from the Punggye-ri Nuclear Test Facility to the Mayang Do Naval Base where shortly thereafter at least 10 Yono-class miniature submarines [photo 2nd left] departed and are feared to have aboard them atomic bombs.

A Yono-class submarine is thought to have fired the torpedo attack which sank a South Korean Pohang-class corvette, the ROKS Cheonan on 26 March 2010 in South Korean waters that killed 46 and injured 56.

According to some investigators, the weapon used in the attack was a North Korean-manufactured CHT-02D torpedo, from which substantial parts were recovered. The device allegedly exploded not by contact, but by proximity, creating a powerful pillar of water, called the bubble jet effect.

Critical to note about North Korea’s CHT-02D torpedo, this MOD bulletin warns, is that it is capable of being armed with a small nuclear device similar to that of the United States M-28 or M-29 Davy Crockett Weapon System developed in the 1950’s and having a yield equivalent to somewhere between 10 or 20 tons of TNT.

So concerned were Russian military leaders about the potential danger these atomic bomb equipped North Korean submarines could pose to world peace, this MOD bulletin says, UN envoy Vitaly Churkin, on 5 March, called for an extraordinary meeting of the UN Security Council, and which yesterday punished the Hermit Kingdom with tough, new sanctions targeting its economy and leadership.

Within hours of these new UN sanctions being announced, this bulletin continues, the state-run Committee for the Peaceful Reunification of Korea announced that “[North Korea] abrogates all agreements on non-aggression reached between the North and the South,” severed its hotline with South Korea, and its leader, Kim Jong-Un, called for “all-out war” as he visited a frontline military unit involved in the shelling of a South Korean island in 2010.

Most worrisome however, this MOD bulletin says, was North Korea’s state news agency warning yesterday: “Now that the US is set to light a fuse for a nuclear war, (our) revolutionary armed forces… will exercise the right to a preemptive nuclear attack to destroy the strongholds of the aggressors.” The North Korean official reading this ominous statement further stated that a second Korean war is “unavoidable.”

To North Korea’s war strategy in employing these atomic bomb equipped submarines, this MOD bulletin warns, is to attack their enemies vital shipping ports which, if successful, could destroy the entire global economy.

Russian military analysts contributing to this MOD bulletin note that the most likely targets for these atomic bomb equipped North Korean submarines include South Korea’s Port of Busan, Japan’s Port of Yokohama, and the United States ports of Seattle (Washington) and Oakland (California).

Unbeknownst to the American, South Korean and Japanese peoples about these North Korean mini submarines, and perhaps best stated by the US National Defense magazine, is that the US Navy has already admitted that it has “no silver bullets” able to defeat them.

To how vulnerable the Western coastal areas of the United States currently are was noted by Russian military intelligence experts on 8 November 2010 after a Chinese submarine successfully penetrated American waters and launched a missile in full view of Los Angeles, and as we can read, in part, as reported by the Infowar News Service:

“China flexed its military muscle Monday evening in the skies west of Los Angeles when a Chinese Navy Jin class ballistic missile nuclear submarine, deployed secretly from its underground home base on the south coast of Hainan island, launched an intercontinental ballistic missile from international waters off the southern California coast.

WMR’s intelligence sources in Asia, including Japan, say the belief by the military commands in Asia and the intelligence services is that the Chinese decided to demonstrate to the United States its capabilities on the eve of the G-20 Summit in Seoul and the Asia-Pacific Economic Cooperation summit in Tokyo, where President Obama is scheduled to attend during his ten-day trip to Asia.”

This MOD bulletin further notes that China’s 2010 submarine incursion into US waters utilized the “concealment and camouflage” of large container ships entering the Port of Los Angeles, and which these “missing” North Korean mini subs are “without doubt” planning to do too as they approach their strike targets.

As White House spokesman Jay Carney told the American people today, “I can tell you that the United States is fully capable of defending against any North Korean ballistic missile attack,” this MOD bulletin notes that the Obama regime is failing to tell their citizens the true state of this war and the danger it poses to the whole world.

The same cannot be said of Russia, as within 5 days of the 12 February North Korean nuclear test, and their subsequent moving of atomic materials to their submarine base, President Putin ordered the largest nuclear army drill in two decades in preparation for what in all terms can only be called World War III.

To if North Korea will be successful in carrying out its nuclear strikes it remains unknown, as does also the intentions of the United States should they begin to bargain with the Hermit Kingdom.

Phi Beta Iota:  Having submarines, having nuclear materials, and having submarines capable of firing missiles that can deliver nuclear materials are three completely different threats.  We tend to discount the above.  HOWEVER, there is an even worse worst case, that of a deliberate arranged nuclear attack by North Korean on South Korea for the purpose of distracting the US public and justifying a massive investment (further borrowing) in the US pivot to Asia that is neither affordable nor justifiable.  In times past such a scenario would be labeled insane and impossible — today, with Germany arming Israel with nuclear-capable missile submarines, and Israel as well as elements of the US dual chain of command clearly prepared to commit any atrocity that furthers their agenda, we do not discount the moderate possiblity of a joint covert false flag nuclear event in Asia made possible by Israel and/or the USA.