Physicists Tie Fluid Into a Knot 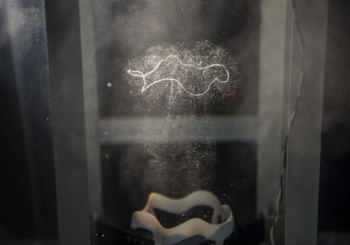 The vortex knot was first theorized a century ago, but only created in a lab this year.

Physicists at the University of Chicago have created a vortex knot in a lab environment, a feat which has been theorized for a century but had never been successfully attempted. Creating a vortex knot is, according to a University of Chicago press release, “akin to tying a smoke ring into a knot.” Physicists have been puzzled as to why a vortex knot isn’t a stable phenomenon, in theory it should be, but in practice they stretch themselves out and break up. The stretching culminates in a reconnection event, where loops elongate, circulate in opposite directions, and then collide. As they collide, parts of the vortices annihilate other parts – unlinking and unknotting the vortex. All of this is sounds very complex, but in reality is a matter of forces smashing into each other and cancelling each other out. The researchers’ findings in creating a knot are relevant to many fields, and could lead to advances in turbulence, plasma physics, ordinary fluids, and exotic superfluids – where knots likely appear, but are difficult or impossible to observe.

“We look at plasma physics and turbulence every day in the sun,” Study researcher William Irvine said. Those fields have many mysteries, long unsolved, that could be better understood by knowing how a vortex knot works. Plasma flows behave in highly complicated ways, but the electrically charged gas they’re composed of behaves and transfer energy much like air in a vortex knot. Additionally, Irvine thinks that “knottedness” is probably a conserved quality – like energy and momentum. “If confirmed, this would deepen our understanding of the dynamics and connections between many disparate fields,” Irvine said. “We don’t know if its true or not, but I think we can finally test this in experiment. There’s actually around 50 years of theory on this subject with no clean experiments.

The experiment was inspired by videos of dolphins blowing air-core vortex rings. Researchers replicated what the dolphins were doing using 3D-printed hydrofoils, and they went through about 30 different shapes before they got the vortices they wanted. The different shapes were captured by a high-speed camera, primarily outlined by bubbles in the water. “The bubles are a great trick because they allow you to see the core of the vortex very clearly,” said Irvine. In the future, the team hopes to scale up their research to create larger, more stable rings.