The first scoop of Martian soil analyzed by Curiosity Rover’s built-in laboratory has revealed a high amount of water in the soil, according to NASA.

“One of the most exciting results from this very first solid sample ingested by Curiosity is the high percentage of water in the soil,” said Curiosity researcher Laurie Leshin, of the Rensselaer Polytechnic Institute. “About 2 percent of the soil on the surface of Mars is made up of water, which is a great resource, and interesting scientifically.” 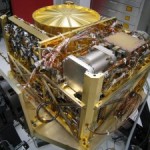 SAM allowed the scientists to identify a wide range of chemical compounds and to calculate the ratios of different isotopes of the sample’s key elements.