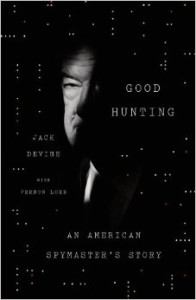 I strongly recommend this book! I happily disclose that I received the book from the publisher at my request and that I have worked for Jack directly. I have also reviewed hundreds of books on Intelligence. This is easily the most insightful and sophisticated look at the important covert action aspect of the intelligence business. This critical tool of statecraft was established in the charter that created the CIA during the Truman administration. It gave CIA the mandate to carry out “special activities as directed by the President.” Over his 32-year career, Jack was uniquely involved in a wide range of these covert activities, including the ousting of Allende in Chile, the Iran Contra affair, the successful defeat of the Russians in Afghanistan, the hunt for drug Kingpin Pablo Escobar and the reinstatement of Aristide in Haiti.

He also weaves in his direct experiences with Rick Ames, the Soviet mole inside CIA as well as the hunt for Robert Hanssen, the mole inside the FBI. Moreover, he shares important insights about his tenure as the chief of all CIA worldwide operations in the mid 90″s. That said, his main contribution is setting out the good and bad characteristics of covert action. He does it with candor , wit and wisdom.

He articulates the characteristics of smart Covert Action (CA), one I might call the “Devine Doctrine,” for successful covert operations. The seven principles are:

While I don’t share his view about the priority of CA and would rather emphasize decision-support (creating ethical evidence-based tailored intelligence for Whole of Government so that the public interest is served across every mission area), I must emphasize that CA is a major part of intelligence and this book is a necessary read for followers of intelligence. If and when covert action and clandestine operations are necessary, this is the Bible, or in military terms, “REF A.” This book is valuable to multiple audiences. For the professional audience — young case officers and rising managers — this is the new bible, a bit thin on some important topics of interest to me, but deep where it matters most.

It is also noteworthy that Good Hunting has an added benefit in his describing his post-CIA work in the private sector where he along with prominent NYC financial crimes attorney Stanley Arkin have created a very successful private sector intelligence business. There is very little written on the subject at the high end of the industry. The conclusion of the book is a mix of success stories from commercial intelligence that should open many reader’s eyes — Jack has raised the bar on what can be done in emerging marketplaces particularly, at Wall Street levels of speed and value — and I totally embrace his prescriptions for modest reform in how the US Government makes decisions, goes to war, and wages peace and commerce. All this from an individual that could arguably be called the most successful US spy in modern history, and also one of the most successful commercial intelligence pioneers in modern history.

This is a superbly-crafted book that took me seven hours to appreciate, and another hour to organize my notes and develop this review. While it can and should be read on the train to and from NYC, it is more properly appreciated as the tip of the iceberg, an invitation to get serious about the evolving craft of intelligence. Each chapter in this book covers an extraordinary aspect of clandestine operations; I have been directly involved in some of these. I give the book high marks for communicating important lessons, and for avoiding disclosure of details that would detract from their intended narrative.

There are so many details in this book that are valuable (e.g. $1000 as standard monthly salary for an asset) and so much that I agree with (e.g. torture does not work, exiles are generally impotent problem children) this is absolutely a book that merits careful reading — this is not just a spy story, this is a management, leadership, and practical handbook. I would rate it as the modern equivalent of the books by Dulles, Helms, and Colby.

The entire book is a study in incremental innovation within the constraints of a very grid-locked system.

There are of course matters not addressed in this book. Below I link to seven books that in my view complement this book and the three books listed above, along with the 300+ books in my master list, Worth a Look: Books on Secret Government Intelligence:

Informing Statecraft: Intelligence for a New Century
The Secret Team: The CIA and Its Allies in Control of the United States and the World
Who the Hell Are We Fighting?: The Story of Sam Adams and the Vietnam Intelligence Wars
Killing Pablo: The Hunt for the World’s Greatest Outlaw
Gold Warriors: America’s Secret Recovery of Yamashita’s Gold
Someone Would Have Talked
A Pretext for War: 9/11, Iraq, and the Abuse of America’s Intelligence Agencies

A master class in spycraft from one of its greatest practitioners

Jack Devine is one of the legendary spymasters of our time. He was in Chile when Allende fell; he ran Charlie Wilson’s war in Afghanistan; he had too much to do with Iran-Contra for his own taste, though he tried to stop it; he caught Pablo Escobar in Colombia; he tried to warn George Tenet that there was a bullet coming from Iraq with his name on it. Devine served America’s interests for more than thirty years in a wide range of covert operations, ultimately overseeing the Directorate of Operations, a CIA division that watches over thousands of American covert operatives worldwide.

Good Hunting is his guide to the art of spycraft, told with great wit, candor, and commonsense wisdom. Caricatured by Hollywood, lionized by the right, and pilloried by the left, the CIA remains one of the least understood instruments of the United States government. Devine knows more than almost anyone about the CIA’s vital importance as a tool of American statecraft. Now, as he sees it, the agency is trapped within a larger bureaucracy, losing swaths of turf to the military and, most ominous of all, being transformed into a paramilitary organization. Its capacity to do what it does best has been seriously degraded.

In wonderfully readable prose, Good Hunting aims to set the record straight. This is a revelatory inside look at an organization whose history has not been given its real due.

ROBERT STEELE: Jack was my best all-around boss in the clandestine service although Jerry Svat was right up there with him is a denied area variation. Jack is a world-class manager with attention to detail and an ability to herd feral beasts such as I have never seen elsewhere. If we ever have a government that actually wants to get clandestine operations back on track, Jack would have my vote — provided we also have an Open Source Agency (OSA) such that no task goes to any secret capability unless the OSA certifies that it cannot be done faster, better, cheaper, and more ethically with open sources — and we have an utterly ruthless combination of counterintelligence and inspector general to keep the clandestine service focused solely on tasks that are in the public interest. I anticipate this book being as good as and a complement to the books by William Colby, Richard Helms, and Stansfield Turner.

Today Jack runs the Wall Street CIA in a new, more open, and vastly more well-rounded fashion than ever before. Jack is the ONLY senior clandestine officer I know of who listened, learned, and applied Open Source Intelligence (OSINT) as part of his post-retirement full-spectrum Human Intelligence (HUMINT) practice.

Worth a Look: Book Reviews on Government Secret Intelligence