I confess to having trouble with this book — it is more escoteric than I am accustomed to  but in the end is make some vital points that boil down to a solution for complexity that elevates humans, demands inclusion of all points of view as well as respect for the truth, and fully integrates philosophy, science, and evaluation.

Below are two graphics from the conclusion.

END_OF_DOCUMENT_TOKEN_TO_BE_REPLACED

This is a most extraordinary book intended for professional officers and petty officers, not your average day sailor.  Until I was offered this book as a gift, my personal D Skipper collection consisted of three items:

This book at 542 pages is vastly more detailed, nuanced, complex, and rewarding than my three “cruising skipper” guides as it is intended for professional officers and petty officers with a particular respect for those manning warships and confronting warships in both international waters and inland waterways. It is part of the US Naval Institute Blue & Gold Professional Library that includes such standards as Command at Sea and Fleet Tactics and Naval Operations.

END_OF_DOCUMENT_TOKEN_TO_BE_REPLACED

Radical resilience – not disease – is your body’s destiny

Regenerate means to rejuvenate, revitalize, and renew. These words hold great promise, especially for so many of us who feel something is wrong, most often in our bodies but increasingly in our souls.

I’m writing this book in the hopes that I can help others who are experiencing persistent symptoms or sickness to pause and consider that their bodies are sending a message that something they are consuming, breathing, or thinking is toxic or biologically incompatible with wellness.

END_OF_DOCUMENT_TOKEN_TO_BE_REPLACED 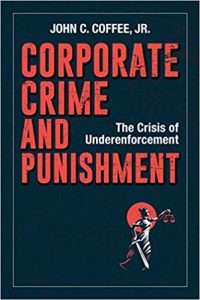 In the early 2000s, federal enforcement efforts sent white collar criminals at Enron and WorldCom to prison. But since the 2008 financial collapse, this famously hasn’t happened. Corporations have been permitted to enter into deferred prosecution agreements and avoid criminal convictions, in part due to a mistaken assumption that leniency would encourage cooperation and because enforcement agencies don’t have the funding or staff to pursue lengthy prosecutions, says distinguished Columbia Law Professor John C. Coffee. “We are moving from a system of justice for organizational crime that mixed carrots and sticks to one that is all carrots and no sticks,” he says.

END_OF_DOCUMENT_TOKEN_TO_BE_REPLACED


The #1 Indian bestseller now available to Kindle readers worldwideWhen it was published in paperback in India in 2005, Open Secrets became an instant sensation. It became the #1 Non-Fiction bestseller, a position it held for many months and generated a firestorm of controversy. There were court cases, death threats against the author, intense debates in the media and a change in India’s Official Secrets Act after the issues raised in the book caused uproar in Parliament.

END_OF_DOCUMENT_TOKEN_TO_BE_REPLACED

“I am not a Satan turned saint. It is not that I woke up one night and felt the bite of conscience. I have tried to explain that I have been a victim to two quarrelling squirrels inside me. The bread earner mostly defeated the dream merchant. I have suffered and I still suffer from the indignity of carrying out orders, which I would have not done had I continued in my teaching and journalistic profession.”- Maloy Krishna Dhar

An astonishing account of an Indian Intelligence Officer, the book is a detailed confession to the Indian public. The book deals with what an intelligence officer goes through while doing his duties. It is the ‘duty’ itself that tries to define itself between being a tool at the hands of the deep- state and an underlying conscience that keeps kicking to review the author’s deeds. Spying sometimes requires a barter of conscience with personal well-being. The author confesses to the misdeeds he did while he was spying for the country often by spying on the country.’

END_OF_DOCUMENT_TOKEN_TO_BE_REPLACED

I know the author personally, and was introduced to him by Sterling Seagrave (RIP), whom I also knew personally. Sterling was for me the top chronicler of Asian history both sordid and splendid. One of his books (linked below) that comes with three CDs of maps, photos, and data, is worth multiple trillions of dollars provided the Guardians of the individual sites can be won over.