Skagit County, Wash. — Robert M. Gates is a crier. He is also an expert at restraining himself.

The war is fought in the throat, and lost in the eyes. 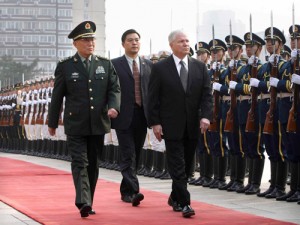 He clears his throat as if it will hitch his composure back into compliance. His eyes, however, water and redden. It’s clear what will happen if he blinks.

He sits in a wooden swivel chair but has stopped swiveling.

Phi Beta Iota: A well-written piece. Gates failed on the big things — during his tenure there was no military intelligence to speak of — no ethical evidence-based decision support for strategy, policy, acquisition, or operations. During his tenure he allowed the Army to substitute theatrics for thinking, and did nothing to achieve Whole of Government anything. It is right and good to weep for the thousands who died, became amputees, or were wounded. It is better to avoid unjust war in the first place, and to weep over the millions that suffered because the Secretary of Defense is a bus driver who takes the bus wherever he is told to take it by corrupt politicians who vote on the basis of who pays them to vote, not on the basis of the public interest.

Review DVD: The Fog of War – Eleven Lessons from the Life of Robert S. McNamara

Review: Wilson’s Ghost–Reducing the Risk of Conflict, Killing, and Catastrophe in the 21st Century