[ Editors Note:  Once again we see a steady stream of evidence coming out of Iran as to how our wonderfully unbrilliant threatening foreign policy has forced them into a “Manhattan Project” level commitment to increase its domestically manufactured defensive weapons systems.

At the top of the list has been missile development following the Russian model, to get the best bang for their buck in defeating air attacks from planes and missiles. I would suspect that they are designing modular upgrades into all of these so they are a parts change upgradable wherever possible.

Iran’s deep scientific bench has been tasked with developing not only state of the art defensive weapons, but even better. This means they are working on the breakthrough fuels for speeds that are needed to defeat standard missile defenses.

With the best Russian missiles, by the time a pilot hears the first beep that he is being tracked, he only has two to three seconds to live, not even enough time to get out of the plane.

Defenses against these will certainly be developed…for getting them one at a time. But especially for ships, having a blizzard of these coming at you will overwhelm its defenses.  Mass production of these reasonably priced weapons will once again create demands for more expensive platforms for our defense contractors to make. But they will not really be for defense, as there are no offensive threats out there.

Our military has been morphed into an offensive one, but they have not told that to the troops, and I doubt they will. They have been reduced to being the muscle for the mega business elites…mercenaries with very nice wrapping paper. They will eventually figure this out, but many won’t mind as long as the checks don’t bounce…

A high-ranking Iranian military commander says the Islamic Republic is developing a new version of the powerful and high-precision Sayyad (Hunter) missile to be mounted on indigenous S-200 missile defense systems.

Commander of Khatam al-Anbiya Air Defense Base Brigadier General Farzad Esmaili said on Friday that Iranian defense experts are working on the development of Sayyad-3 missile. 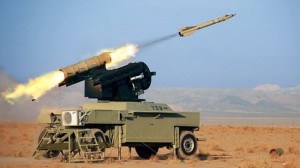 He added that the mid-range, high altitude and solid-fuel Sayyad-2 missile has proven successful in locating and hitting even small aerial targets.

Sayyad-2 surface-to-air missile is said to have a maximum range of between 200 and 350 kilometers. It has been designed based on state-of-the-art technology, which can destroy different types of helicopters, drones and targets with small radar cross-section, high speed and maneuverability within its operational range. It was first tested in April 2011, and is currently in the Iranian Armed Forces’ inventory.

It is a very long-range, medium-to-high altitude surface-to-air missile (SAM) system designed to defend large areas from bomber attacks or other strategic aircraft. Each battalion has 6 single-rail missile launchers and fire control radars. It can be linked to other, longer-range radar systems.

Each missile is launched by 4 solid-fueled strap-on rocket boosters. Maximum ranges are between 200 and 350 kilometers depending on the model.

Esmaili further noted on Friday that a new missile has been mounted on Mersad (Ambush) missile system, which is being used at Khatam al-Anbiya Air Defense Base. He said the missile “will surprise the enemy on the battlefield.”

The state-of-the-art technology used in Mersad links it to other anti-aircraft batteries and provides it with the unique ability to combat electronic warfare.

In recent years, Iran has made great achievements in its defense sector and has attained self-sufficiency in producing essential military equipment and systems.

Tehran has repeatedly assured other nations that its military might poses no threat to other countries since the Islamic Republic’s defense doctrine is based entirely on deterrence. 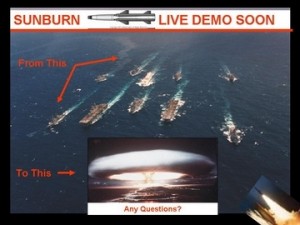 Phi Beta Iota: Among many dirty little secrets are this FACT: the US rolled over Iraq because Iraq did not have a military in any sense of the word — that was the conclusion of the US Army Strategic Studies Institute after-action report. Now of course the US has left Iraq with only one accomplishment: placing the Shi’ite majority in charge, an accomplishment appreciated by Iran. On the naval front, the US Navy is severely handicapped by its inability to cope with modern defenses.