If Jesse Ventura or any true, electable populist candidate reads this and wants to be President, I have a plan to make it so. I ran for President in 2012, accepted as a candidate by the Reform Party. I accomplished my goals within six weeks and published my lessons learned in Reality Sandwich, where the article, How I Tested the Boundaries of the Two-Party Tyranny, is still being read today.

Here are the two most important points:

First, no one running (I am always open to surprises, indeed miracles!) for President, then or now or into the future, is actually running to put the public back into power. They are all – from Ron Paul to Gary Johnson to Jill Stein and others –running to put themselves into power. I connected with every single Presidential candidate in 2012, and established that not a single one of them was ready to sponsor Electoral Reform or actually challenge the two-party duopoly. In my personal experience, they are all, without exception, part of what Theresa Amato calls the Grand Illusion.

Second, if we start now and use 2015 to force the issue of Electoral Reform, while also creating a Sunshine Government led by Jesse Ventura, or someone like him, we can win in 2016 and restore the integrity of the US Government and of America the Beautiful. A Sunshine Government means a working Coalition Cabinet that produces a Balanced Budget, a plan for Full Employment, takes global warming seriously, solves major domestic issues like immigration and social security/Medicare and replaces all taxes with a miniscule Automated Payment Transaction (APT) Tax on all transaction (tax the entire pie including currency and stock transactions, not the sliver called income as well as taxes on things – material, energy, land –that has been designed to replace payroll taxes. Both taxes would provide ample revenues to replace existing revenues and more! We can Get America Working! 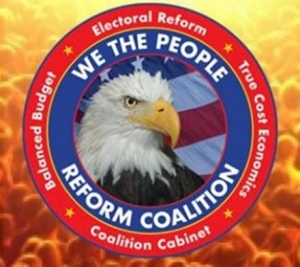 01 Electoral Reform is Ground Zero. The two-party duopoly has a deal–they work together to block ballot access by the 50% or more of the public that has been disenfranchised: members of the six other accredited parties (each winning 5% of the national vote at some point in the past) and Independents. I had to run for President to learn the names of all six of the other parties: Constitution, Green, Libertarian, Natural Law, Reform, and Socialist. I had to run for President to find out that Congress has the power to force all states to allow all parties on all ballots for federal office, and that Congress has refused to do this nine times running. Furthermore the two parties have the power to accept or reject a legitimate third (party) candidate for the presidential debates. Occupy was not able to “hear” to my six-minute Electoral Reform YouTube Brief even though it went viral on YouTube and at Reddit. If Occupy can come back together to occupy the home offices and front lawns of each federal Senator and Representative, I believe we can force the issue of the Electoral Reform Act of 2015 – all eleven points, and rapidly, non-violently, pave the way for the restoration of US Government integrity from 2016 onwards.

The ideas that I pulled together from others – such as Michael Cudahy of the Goldwater Camp, Jock Gill of the Clinton Camp, Joe Trippi of the Dean Camp, and Jim Turner, a transpartisan – are all outlined in simple terms at We the People Reform Coalition. Here are the other six key points.

02 What the President thinks does not matter. From my and a great many others vantage, a critical job of the President is to restore the integrity and legitimacy of the government, and to put every issue of consequence on the ballot, with a living ballot platform that allows all of our voices to be heard on every issue every day, while votes are scheduled as needed at local, state, and national levels.Picking a President on the basis of a stump speech designed to avoid being pinned down on substance and appeal to a majority is the wrong focus. Pick a President genuinely committed to restoring the average American — all of us — to power. Electoral Reform is the truth-teller — no one now running for office passes that test.

03 A Balanced Budget Ends Corruption. It is the ability of the government to borrow and print money without being accountable to the public that funds both elective wars abroad and the mass surveillance militarization of the police state at home. Enough! By ending all existing taxes, including the payroll tax, and adopting the taxes on materials, energy and land and the APT Tax whose rate is set by national ballot – not by the government and certainly not by our corrupt legislators – we end the current state of affairs

04 Jobs Come With Integrity. We do not lack for job possibilities in America, we lack for integrity across the board. We first have to make it clear to the public that the actual unemployment rate is 22.4% (see ShadowStats) and that most college degrees are worthless – over 30 million new graduates are back home with their parents because most jobs requiring literacy have been exported. We have millions of veterans being abused by a failed Veterans Administration, with 22 of them committing suicide every single day. Soccer moms are also suffering, having seen the middle class dream turn into a nightmare. We can create jobs for every citizen and solve immigration.

05 The Truth At Any Cost Lowers All Other Costs. From Fog Facts to Missing Information to Lost History to Forbidden Knowledge to Weapons of Mass Deception and Weapons of Mass Instruction to Forbidden Knowledge and Manufacturing Consent – all book titles – there is little truth to be heard from the US Government. It is time We the People reach down deep and pull out Holistic Analytics, True Cost Economics, and Open Source Everything Engineering. These are happening in isolated pockets of sanity from Brooklyn to corners of Oregon, but they need a big push. Buycott and Intel’s new #ConflictFree as well as #TrueCost offer great promise.

06 A Coalition Cabinet is an Honest Thoughtful Cabinet. It is not possible for either of the two parties to form an honest cabinet. As a scenario, I have chosen a Coalition Cabinet as a starting point for public appreciation of the possibilities. My concept creates, in addition to the Vice President as Chief Operations Officer for the Commonwealth, a Secretary General for Global Engagement, a Secretary General for Education, Intelligence, & Research; and a Governor General to chair the Governors Council, long overdue for a more robust role in setting national policies and priorities. Individual names are listed within each, merely a starting point for a broader national conversation about choices.

07 The Public Gets the Government It Elects and Tolerates. As I observe America’s electoral landscape, I see 50% of the public completely disenfranchised, lacking access to the ballot and marginalized in the context of a two-party duopoly, and I see the other 50% of the public split between two parties whose leaders, once elected, attend to those who pay for attention on any given issue, rather than the voters who elected them. The studies are clear – emails from voters are ignored, and the public interest takes second place to special interests – the politicians attend to those who receive taxpayer funds, not to the taxpayers themselves. This is the government we have all elected, most of us complicit by our inattention and apathy, and this is the government we tolerate. It need not be so.

Where is Jesse Ventura? I’d like to see him or someone like him lead this battle, and I am most certainly ready to get into it myself.